Notes in a Sydney Train 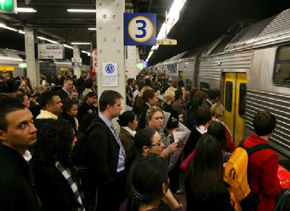 Scrubbed timber has no smell. The burnt brake pads and the metal wheel flange create their own dust and heat and smell which lifts in the warm afternoon, hangs in the humid air and is pushed aside by the train as it sighs up to the platform. I watch the handful of people who angle towards the last carriage. They walk past the second to last to align with the trailing one as if there is something lucky by being there. Or not being somewhere else. The hot metal smell lifts along the platform and pervades the carriage, especially upstairs where I sit on the run into Central. Three young men , two Asian, sit in earnest conversation discussing the various merits or otherwise of apartments in this or that suburb. They don’t look old enough to be so preoccupied but they might be planning on leaving home. The subtle candy scent of bubblegum drifts back from them and they chomp away through their laughter and discussion. We pause at Wollstonecraft, a country station on a city line. No one embarks. None alight. We admire the flowers, the sun on the trees, the glimpse of harbour blue diamonds. We jolt away and the disruption shakes the dream – this is no holiday jaunt down to the end of the garden, flowers and sparkling harbour notwithstanding. It’s a functional people moving device at the end of a business-like engine on a city line designed to get us from A to B as quickly as possible. Quality of ride is a secondary or tertiary concern. As if to underscore the point the utilitarian concrete prison of North Sydney is now upon us. None depart. Six embark. It’s peak hour but only the superstitious ones are this far back and none but they venture this far. One includes a Muslim woman who is in nodding agreement with a man who shares with the whole carriage the inability of a junior manager to manage a team after being in the job for three years. He sounds aggrieved. Soon he is talking about inappropriate language on children’s TV programs and then returns to the subject of poor management practise. I overhear “…in an iron fist”. She nods. “He did not let them get away with it a bit.” She nods some more.
“Colin did not have any idea.”
She murmurs and seems to agree. A station approaches, he bangs his fist into the other palm and is then gone.
Peak hour surges onto us as we arrive at Town Hall and the crowd floods in like a wave into a crumbling sandcastle. The discussion about Sydney accommodation climbs off and the scent of bubble gum goes with it. Now it seems there is nothing but the damp odour of summer sweat pervading suit cloth and the day worn scent of deodorant struggling against a hot and stuffy afternoon. Central Station – a hissing, jolting stop. This apprentice driver will not be missed. The run out to Newtown was a different train in a different country – smooth and clean. But still full of people and their conversations.
“I think I need to practise that loop run”.
“Yeah, and I need to rerun that if-then statement”.
“Nice web site by the way. Looks good”.
“Thanks, it came together once I had the SQL sorted out”.
At the top of their voices two girls regret not catching the express, then share their coding experiences with the rest of us.
Here’s Newtown. I jump.