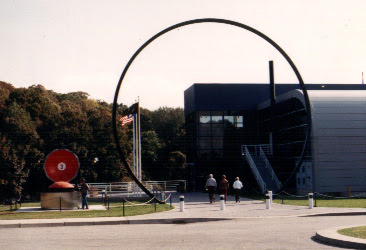 Last night was spent in a musty naval quarter that was bit of a surprise. For its filthy state that is. The mould and damp caught in the orange carpet still pushed through the disinfectant that had been used very lightly in the bathroom. Not having much luck with military accommodation over the last couple of nights. But the apartment block was empty and I did not have to contend with noisy rutting neighbours as I did at . I drove on up towards but the highlight of the day was the submarine museum which is here at .

Tied up alongside, in the , is the SSN Nautilus. The first nuclear powered submarine, now open to the public. After crawling around in our O-Boats the Nautilus, tiny compared to the newer submarines in the USN ORBAT, is still remarkably large and spacious. I could walk everywhere standing up and ascended and descended through three decks. Stainless steel everywhere, roomy bunks and the ubiquitous ice cream machine. The military is fuelled by ice cream in the same way their police are fuelled by Twinkies.

Apart from the Nautilus I was struck by the sheer scale of the newer submarines. At the entrance to the museum is the rib of an class submarine. For a couple of hours this morning I was the only visitor here. Eventually, just before lunch some people arrived and wandered into the centre. They usefully scaled the size of the rib for me and I managed to grab a photo of them walking through the rib “o-ring”. I reckon an would have to be eight or nine stories deep. Imagine the expansiveness of engineering mind that envisages then designs and builds a submarine that size. There is nothing small minded about this industry or weapons platform at all.

It took a while but I eventually tore myself away from this morning and brought away with me a mixed bag of memories. A rather bizarre streak dinner with a difference, finished by a family meal with people I don’t know, a quarter you might only impose on recruits (and in which I worried about my health) and an unexpected tour of a nuclear submarine – by myself. I think I am coming to expect such from this country – everything in your face but such a range of extremes.