Paul Tibbets and That Nuclear Bomb 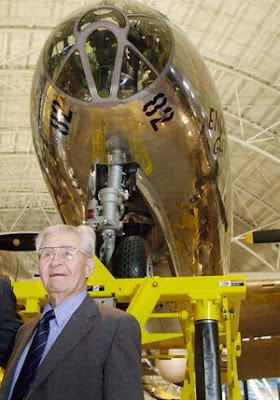 Paul Tibbets made news again yesterday with the announcement of his death. (NYT Obituary) Paul was the pilot who flew the Enola Gay (named after his mother) from which the nuclear weapon was dropped on Hiroshima. The news of his death prodded surprising reactions from some in the the newspaper blogs I have been reading. I have the view, perhaps historically driven, that the decision to drop these two weapons was sensible when weighing up the costs of Operation Olympia, the planned invasion of the Japanese mainland. With more than one million casualties anticipated, the code breakers indicating the Japanese military factions had convinced the country to fight on and that the defences of the areas into which Olympia was to be directed had been reinforced, combined with Iwo Jima and Okinawa giving a foretaste of what a hometown fight was going to look like (pretty nasty), the two bombs made a lot of sense. But sixty or so years on and our revisionist perspectives prompt comments and views I don’t entirely understand – some thought Tibbets’ (apparently) painful death was a sign that he got what he deserved from God (just as well God is not a vindictive fellow isn’t it?!). Others felt he was an officer simply doing his job (I am sympathetic to that view) while others felt he could have said “no” to the mission – clearly failing to understand the times in which Tibbets lived, or the structure in which he worked. All mixed up in other commentary that gets emotive after all this time about the rights or wrongs of various aspects of that war, aspects which have no connection with Tibbets in any way. Sadly Tibbets lived some of that ambivalence, emotion and hostility in his latter years and he has asked that he be buried with no tombstone least that be a site for protest. Whatever the rights or wrongs of that war it is a part of our history with threads that tie into the fabric of our community today. Beating up on Tibbets now, or at any other time for that matter, isn’t going to change any of that.