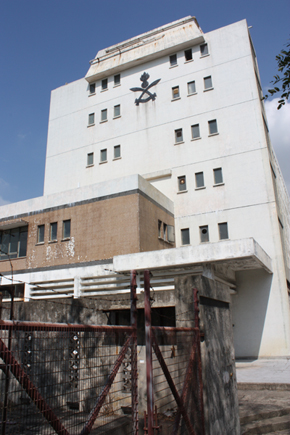 I am staying at the old Gurkha (British Army) Barracks at Perowne in Hong Kong. Tuen Mun to be precise. 2 Castle Road to be even more exact. It is a visit that is strangely affecting me in a way I was not expecting at all. Let me test the feelings and see what it is that is moving me.(Photo: Michael)

Barracks for some can be hell, especially those weeks spent in boot camp. My own experience was a stimulating one with plenty of physical hardship meted out by instructors as well as by each other. You either rise above it or sink quickly and those who sink ship out broken, most barely knowing why or how their adventure had gone sour so quickly. But for most it is a place of camaraderie and mateship, of hard times (and women) shared, common enemies fought, rules broken, blood spilt, and far too much illicit booze. Intense physical activity, and laughter. Breaking curfews, smuggling yourself out of the front gate, not thinking about how you are going to get back in. Sinking hearts as the drill nazi steps through the rain onto the parade ground, knowing you were not getting off there inside two hours. Dropped rifles, screaming instructors, the joy of a drill move which, without warning, clicks into place and a platoon functions as one. Broken windows, surprise snap inspections at 0200 (“O dark o’clock”) with girlfriends hiding in cupboards (no women allowed in the lines), with the whole dorm holding their breath as an angry sergeant stalks up and down looking hard up your nostrils from only inches away.

Only when you leave that life behind do you realise how formative it has been. Yet even when you escape boot camp and make it to more relaxed quarters these environments are also formative. Images remain in my head with the clarity of yesterday. Especially of roommate Ian whose burden of gunning down people in Vietnam finally overwhelmed and consumed him in the blast of a gunshot shortly after we parted on separate postings. I think of him often and his boozy happy exterior collapsing in tears as he unlocked his footlocker and slowly pulled out photos of him holding severed heads, posing with more severed heads propped on logs, with cigarettes stuck in their dead mouths, eyes shut but with laughing soldiers standing around. He was not laughing now. Nothing could ever be cathartic enough for him and he would return the photos until he needed to pull them out again and explain yet again how he never wanted to play God.

Ian and others drift back as I walk through Perowne’s dusty lines. Walking through the barracks triggers a lot of these memories. Sweet and sad. Hilarious and traumatic. Idiotic and ideal and lofty. The death of colleagues in accidents, yet the profound depth of community at those same times. I find rooms which perhaps have not been inhabited since the last soldiers left about 14 years ago. Scraps of paper date back to then. Dust is thick on the bedside desks. A wicker chair in one corner and a small table. I grin to myself as I look around and think of that Warrant Office who used to run his white glove over our rooms -he would have a bowel collapse in all this dust and dirt. A small gecko eyes me warily from off the wall. I say hello. And check over my shoulder to ensure none heard me.

I let myself out and close the door behind me, conscious somehow that this is still someone’s room. A phantom lives here. Many do. I can see them reclining on their balconies, hear them yelling at each other up and down the stair wells – for some washing powder, pulling someones leg about a lousy target shoot, the impenetrable, irresistible vagaries of all women, and the urging to pull your togs on and come for a run. Paint peels, taps drip and geckos command the souls here. I try another building.

Standing orders are still posted up here. They startle me – dated 1993 and signed by the RSM Tekbahadur Gurung, his tidy signature daring any of his troops to ignore these instructions. Did his troops ignore these things like I used to? I sincerely hope so. Through swinging doors into the medical centre where I fancy I can smell the disinfectant, hear the supercilious medic who has no patience for your foot rot, crotch rot, or any other rot you want to bring him from the drill ground or undergrowth in the training area. But you have to get past this junior guardian in order to get to a doctor so you plead ailments more severe than they really are. Those guardians fade once you are commissioned -as an officer I used to wonder where they had all gone. They lurk in these places for unsuspecting junior troops and in one barracks the medical centre was a happy hunting ground for the homosexual medic fraternity.

I drift past dusty windows and gaze into empty rooms, cupboards open and mirrors tilted back catching the light. I look away just in case someone looks out and catches me being a peeping tom. And there it is! – I am walking around this place seeing and hearing all sorts of people I met over the years, expecting to see them at every window and around every corner. Do I miss specific people? Not really though Ian, and more particularly my immature inability to speak to his need haunt me. Other faces drift away. I think the impact is happening for more general reasons. I am struck by how much this place, once a sanctuary and home for many people, is now a shell. The place that was the crucible for so much personal development, the creation of character and identity, the fiery forge of friendships and love, is a dusty sepulchre now.

The sepulchre’s phantoms swirl around me wherever I go. This would have been the Adjutants office. This the comms centre. Here the carpenters shop. I walk past the old theatre and think back to $1 movies and hiding in ours after getting all our inoculations (there were many).  Here the canteen. This the officers mess. Here was the outside bar – drinks without having to change out of the working days uniform. What should be solid and enduring and stable is fragmentary, fleeting and fragile, and I resist the realisation that barracks like this which figure in my own background are as transitory and as set for decay and change as this place. It is an insight difficult to repel and even the simple exercise of helping clean the latrines, though treated with a joke about never imagining myself doing such a thing again, is haunted by my boot camp colleagues. I find some abrasives and work those stainless steel hand-basins to a shine, imagining we are all there and under the clock again. (I run out of time to get them to inspection standard but I am sure the handful of refugees who are using this particular facility are in for surprise – at least I hope they notice before they spit their toothpaste all over the place.)

Every day there are phantoms anew. No one else here seems to know though I meet a refugee who shares a similar sentiment. He was some time in the military too and confesses to this being a strange place for him.  It does not hurt to be reminded that”all men are like grass, and all their glory is like the flowers of the field” which quickly whither and fall. All these phantoms silently scream that message and I press on each day trying to ignore their urgings and just concentrate on what we are about – lending a hand to the charity that now occupies this place. They hear no phantoms and are focused on what is needed right now, a damn fine thing. Ian still loiters outside my room each night wanting to talk though.