September 11 2006 : We met Liz and Al and took bicycles down to the Forbidden City, but via . I love the tickets they issue to these places – very sharp looking but only a few cents to buy. A collection of these tell your story by themselves. At we took photos and posed for photos. Even though the temple was under repairs – as a lot of the city is, for which everyone can thank, or curse, the 2008 Olympics. One of the tourist attractions up on the hill, popular mainly with local tourists it seemed, was to pose in emperor’s garb for an outrageous fee.

None of us were too keen on the idea of dressing up but some parents with their four year old were having their young prince pose in royal garb. For some reason his grandmother decided I was “pretty” and wanted me to have my picture taken. Under increasing pressure I did so. We ended up having a picture taken with her sitting on the throne beside me, with my arm around her. She thought it hilarious. She was delighted to the point of paying for additional photos which she proudly showed me when they were printed. She got a kiss on her forehead for her trouble and seemed pleased with that. It certainly added to the spontaneity and atmosphere of the afternoon. 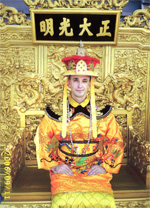 I did not come away with a photo of grandma. Only one of the Pickled Eel as Emperor!