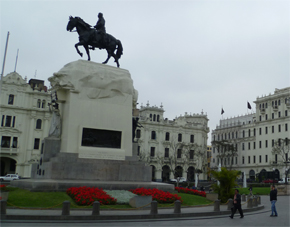 I wonder how General Jose manages to not have the squadrons of blue eyed pigeons paint him and his steed. He is thirty feet above the ground and surely a lightning rod in this vast plaza for any and every pigeon sphincter. And this is surely battlestar HQ for the world’s pigeons. Sorry was getting carried away there. Trafalgar Square is the only battlestar HQ for the world’s pigeons. But this is an outpost HQ of some sort. But no, General Jose is the exception to the rule. As Generals often, mostly are. That has not stopped someone leaving their KFC lunch box on his pommel. Nice touch. I wonder how they got it up there;  there are surly looking boys with guns everywhere. Might have been one of them I guess. Only a few locals are here and they all look as if they are heading some place else so I will move on least I become the missing lightning rod.

Where on earth do these people take a leak? Other than in corners, the aroma of stale urea hinting at a few popular spots as I plough up the blocks. I try a few shopping centres to no avail then just as I was contemplating finding my own corner I stumbled over a sign pointing me in to a small laneway mall. Saved. It was a tight little place and I had to bend my knees to get under the ceiling. Not the most secure place in the world at all. Someone was having a good heave in the cubical next to me then his police radio went off. That will teach you for leaving KFC boxes with the General.

Actually the police are thick on the ground down here with their riot shields and helmets. There are pushing throngs on each corner as suits and rags crush around little booths selling something. I wonder if it is lotto day (Word just self-corrected lotto to loot).

The really big plaza which I finally fall into is pickpocket central according to something I read but if there are light fingers here it is the young boys who are standing on the sidelines watching all the police. They should try their pickings at the archbishop’s palace that fronts on to plaza. He clearly has more than one man needs. Now of course this plaza is significant in a personal way for Herb would frequent this place in his early years in Peru, bolting down here at the slightest sniff of a riot or at the sound of a round being chambered – he seemed to hear that a mile away and was on the spot when the action happened. He even made the front page of the papers, photographed watching a crowd hooting at the President.  He never admitted the gory details in his weekly letters home but in later notes recorded the death of a fellow participant ‘in the fun’ who was shot in the head. On a few occasions he references ‘bullets around his ears’.

Speaking of Herb, a favourite place to take visitors was to the Franciscan monastery so I make my way down there (using the hand drawn map I sketched off Google last night- scale sucks but all the clues stack up thankfully). Built in the sixteenth century Herb delighted in taking those who were game through the catacombs in which human bones are apparently artfully displayed. So now I sit waiting for a group to get started. I paid my money and the bone man awaits – he is mainly skin and bone himself. The sign says no photos. We will see how we go – something rebellious rises up in me when this Church (I mean the Roman one in general) tells me what to do.

Damn, a school group gets in front of us. Bet they are not so chatty in the dungeons. Old skin and bones is on his toes and bags a kid trying to take photos. Mind you her subject would suit a horror movie of gothic proportions – Jesus  on the cross. Looks like his wig was last adjusted in the sixteenth century but even that does not improve his grotesque and ugly appearance. We get under way. 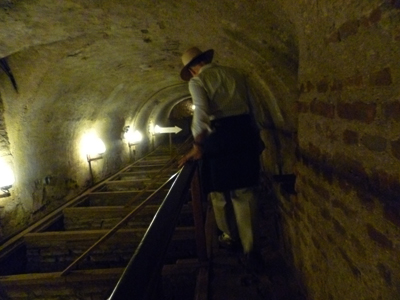 The place is actually pretty old all right. It has been put together with a grand vision of honouring St Francis of Assisi and the frescos and painting are magnificent. The tilers slotted the dates into their walls as they worked and 1620 was when they were working on a section we walked past. But clearly the budget was limited to painters for there were builders here, not artisans, and while the whole pile is impressive there is none of the attention to detail you see in European cathedrals or middle eastern mosques. As we amble on through grottos and chapels and the mustiness and damp deepens and the overwhelming sense of vast expenses heightens I can only wonder at the complete disconnect between this edifice and the people they were trying to reach. No Indian was ever allowed in here and none ever secured an appointment in the clerical hierarchy. I wonder what good ol’ Francis would have said about that if had seen all this idolatry and spending at the people’s expense. Anyway, we get down to the bones, the camera has been working fine all along without being spotted and we are all impressed at the burial ground.

They still pop up every now and then, the loud and obnoxious American tourist, camera bedecked, crazy shirt, and in this case crazy hat. He was with us today, along with some very nice Italian Americans from New Jersey (or, as they are prone to say, Noo Joycee). We were the English speaking group so there were only seven of us, which was better size than some of the other large teams. The loud one (who knew everything and had a bigger one somewhere):

Oh look Gladys  those are pelvis bones (cue eye rolling from everyone).
Oh really dear
Yes, they’re hip bones.
Really?
Yup. You and I are going to look like that one day (I bet he was a fun date).
Australian from the back: Actually you look like it now, just with a little bit of extra covering.

Silence from the mouth, laughing from the Italians and time to leave anyway.
It was a handy reminder as I work through Herb’s notes of just what the work in lifting the Peruvian masses but especially the Indians out of their squalor was up against. And of course I appreciated looking at the places he so constantly references in his letters.