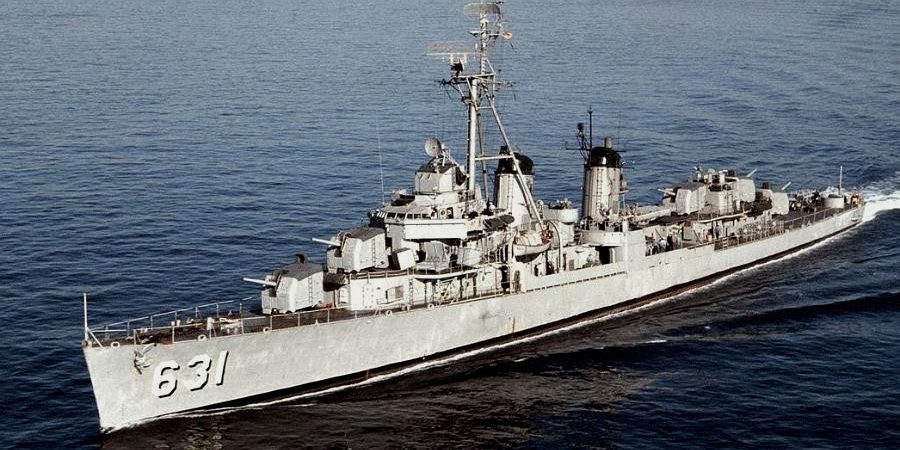 Prologue to Lights on Rue Catinat, a work of fiction which explores the ethics and morality of human intelligence operations

The weed that slushed past in the swirl of muddy water was no longer visible as the falling, soft evening light fused with the deep green shadow that lifted from the jungle on the south bank of the Saigon River. Heavy uniforms designed for northern winters had not been replaced by tropical issue, and the men sweltered in the open air, but especially in the depths of a warship designed with different climes in mind. From the topside, where the sentries had climbed to catch any last eddy of moving air, the heat beat back off the steel deck. The answer to this oven was to stand still, keep bare flesh off exposed metal, avoid ventilation shafts which drew baked air from below decks, and to turn into the breeze – regardless of where the officer of the watch had directed attention be paid.

Facing into the breeze took Seaman Apprentice Sewing’s eyes towards the stern of the warship, over which there was only brown darkness. The occasional drifting light on the water marked a small craft which slid past on the current. The occasional muffled shout gave hints of close-call navigation, for most vessels traveled without lights and simply posted a lookout on the bow to sniff out obstacles. Sewing was amazed that no pace ever slackened and the shadows of punts, barges and trading vessels continued up and down the river as if the sun was still high in the sky. The breeze stirred and prompted Sewing to prop his rifle, unclip two tunic buttons, ease his headgear off his fringe, wipe the salt from his eyes and let his arms hang a little further from his side. It was not the most military of poses but he counted on the night to hide him from any rule bound seniors.

The pull of the river stressed the warship into and then away from the wharf and created a sighing and creaking tension of ropes against steel and bollards. From his gently shifting deck Sewing turned and watched orange pools of light through the framework of dockside tamarind branches and foliage. Shadows drifted through the soft orange as aimless people escaped the heat of their homes. Some cycled slowly past, emerged from the shadow, broke the orange, cast their own long, slow moving and elongated silhouettes and then dissolved into the darkness. Guards moved around doorways, in and out of floodlit spaces, and shadows loitered at the edge of the barracks courtyard. Sewing’s attention was drawn away from this backdrop by the soft movement of those still working on the wharves. Dimly lit ghosts, their work was accompanied by the occasional clank of chain, a shout muffled by humidity, the bump of crates, the knock of steel drums and the cough of a broken Renault truck. The occasional cackle of laughter drifted up and prompted an envy in Sewing. How easy the tropical life. Nothing like the ice rind hardness of his North Dakota upbringing at all. Little did he know, many lived under the wharves in perpetual dampness, their night work the better of two ills. He became lost in his musings about this strange place. Shadows drifted, laughter shifted, cigarettes glowed on the pull, smoker unseen in the dark. Weeds groped as they slipped past, the minute hand seemed to stall, the humidity poured on, Sewing’s arms swung out a fraction wider, his eyelids sagged a little lower and his mind wandered off.

Sewing had figured he could relax. This was a foreign port, to be sure. But the French were friends. And were they not here to show the French just what good friends they could be? A port call for the Captain to wave the flag and drink Cognac. Nothing like that in Dakota. With the single watch officer on the bridge, the radio shift hard-boiling under a vent in the bowels of the ship and Sewing on the deck above the gangplank there was little to keep anyone alert. Or alarmed. Even the normal security detail at the bottom of the gangplank was replaced by a junior French rating and one of his Vietnamese counterparts. They rarely spoke but stood in listless discomfort at a plank with no traffic. Sewing knew the only reason he was on duty was that he had drawn the short straw to keep watch over a strange collection of steel cases stored in the torpedo ordnance workshop located under the aft torpedo rack. The workshop was usually off-limits and was supervised by a very irritable senior sailor who kept junior ratings, and young officers alike, at bay.

Sewing and his colleagues figured the crates were of no real value, for while the circumstances of their appearance were unusual no serious rank seemed distracted by them, and the crates were stacked near a door heavily latched but never locked. Those employed in the workshop had tripped over them for weeks after Naval technicians from the Pentagon had unexpectedly arrived at their San Diego pre-departure dock, loaded them, had a brief, earnest conversation with the Captain and then departed just as mysteriously.

‘Can’t be too much to worry about’ mused Sewing as, moth like, he shifted towards the light and turned his back on the river, and the crates. After all, the Captain ignored them, though he did find that unusual. Normally a Captain wanted to know everything about his ship.

He wondered if the Captain might be pulling a ‘foreigner’, a favour for one of his colleagues. Ship duty-free goods to another port. Or move family heirlooms, or expensive souvenirs to home port at no cost and under the noses of the customs and excise officers. But if a ‘foreigner’ Sewing thought it odd that each container was well secured by a strange seal the Pentagon men had checked and double checked before they drove off.

He straightened up from where he leaned on the aft funnel. His view was partly obscured by the quad antiaircraft guns to his front although his position on the raised platform above the main deck was ideal for the view it gave of the wharves, and for the shadows in which he could hide. But it didn’t give him all-round visibility and he knew he would be slow to react if anything happened elsewhere on the ship. But hey, he was only one man and he couldn’t cover off all the shadows and angles on all the decks. Best to stand up here where he could at least keep an eye on the gangplank and be reasonably close to the workshop. He shifted from one foot to the other, shrugged his shoulder to shift the weight of the rifle, and prod himself awake. He mused on the crates just to his left, rubbed his gritty eyes, thought his woolen socks were entirely inappropriate, and watched the silent shadows shift over the wharf.

He missed the slight bump of the barge on the port side of the vessel. It was one bump of many, loose timber and branches swirling past the hull adding to the slightly muffled background noise of the river. As he struggled with his heavy eyes and leaned back against the funnel the slight rasping of rope on steel was lost to him, as was the soft clunk of the workshop door latch. However he wasn’t so asleep that he didn’t notice the French guard and his colleague move away from the gangplank and walk towards a peanut seller, who had cycled to a stop at the curb. That wasn’t on. An officer would yell and shout at them for their indiscretion. If not tonight, then tomorrow. He moved out of the shadow, ducked under the barrels of the antiaircraft guns and leaned over the rope rails to hail a friendly warning – that the officer of the watch, let alone the Captain had better not catch them off their beat.

Too late he heard the soft tread of foot and the intake of breath that accompanied it. Too late to stop committing his weight to the ropes which robbed him of his balance and defensive reflexes. Robbed him too of any ability to unsling his rifle, put up his hands, or completely turn around to confront his attacker. Too late to stop the plunging blade that shocked his body into submission as it ruptured his kidneys. And far too late to have him shout for help. His knees buckled as his hands clasped his sides. Bleeding to death inside he fell backwards into a shadow’s oil smooth, brown arms, was caught under the armpits, his waist quickly wrapped in muslin, and dragged to the other side of the deck, handed down into waiting, unseen arms, and then passed over the rail to another faceless shadow. He was rested for a moment on the crates which should have still been in the workshop as the bloody muslin was unwrapped. Sewing wondered at the care he received, comprehended the severity of his wounds, briefly puzzled the seals on the crates which, now pressed up under his nose allowed him to see through glazed eyes ‘Fabrique en France’ stamped on them. He wondered at this unlit river barge pressed into the deep shadow of his destroyer, with its crouched lookout on its low bow gazing out onto the river. How did he not see it arrive? Then he was quietly and gently rolled into the four knots of river to drown as he sank and kicked and foamed and washed south into the night, the weeds, and forgetfulness.

On the other side of the ship the two guards drifted back to the gangplank. Through the night they glanced into the shadow of the funnel. But it was to comprehend an absence rather than to wonder at a presence. Their part was done and they would go home at the end of their watch to forget as well.