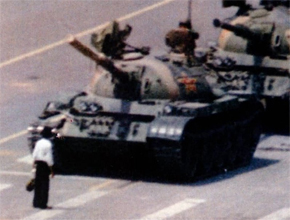 Remembrances of events can be two edged. Was it really twenty years since Tiananmen? Hard to believe all right. Twenty years ago those of us in the various “China watchers” groups in governments around the world were starting to think that the winds of change in China were spring rather than winter zephyrs, and that the government was serious about changing its spots. It was a bit hard to believe since it was less than ten years since Beijing had beaten up on Vietnam and the odd symbolic artillery shot was still fired off at Taiwan. “If it is too good to be true then it probably is” – that investment advice does not always sit comfortably in the intelligence world (or the journalistic one – both  want to be the harbingers of radical, breaking (not always in that order) news). So we watched the armies move into the city, the troops get ready and the armoured vehicles shuffle around, then settle down and wait in the back streets. I don’t honestly recall anyone believing the old boys in the CMC would use, or allow them to be used. But I do recall the frantic phone conversations from Beijing, the ripping telex that went into overdrive (no RSS feeds in those days) and the incredulous analysts glued to television screens, mine as slack jawed as the next person, I am sure, when the troops started shooting and the tracks started grinding. Friends with an apartment along one of the avenues of advance had their living room peppered with bullets. Their eyewitness accounts were fearsome.

Strange for me is the fact that I hear or see no ghosts in Tiananmen Square. I have walked over it maybe a dozen times since that event but so thoroughly has the government wiped  these events from the collective consciousness that the flying kites and the young students that populate the place, or the crowds of inland domestic tourists, have no idea of what you are talking about if you are game to try mentioning the “events of 1989”. And you do have to be game, for the place is lousy with security folk who soon look like bored security folk anywhere on the globe.

In the end we saluted in startled silence the young man who stood in front of the tanks, waiting for him to be flattened. There are all sorts of things swirling around about what he was shouting to the driver, the returned shouts, who he was and where he went.  He is worth continuing that salute.

But I think a salute in equal measure should be given the driver of that tank who had the courage to ignore whatever original command he was given and to not proceed over the top of the now famous jaywalker. If he survived in the military (or at all) I wouldn’t put any money on him ever getting promoted. Moral courage deserves our respect every single time.