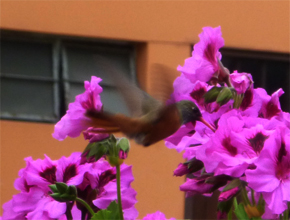 Over the years I have tried all sorts of ways of beating jet lag and figure in the end that simply sleeping when tired is best. That of course means I slept yesterday afternoon, sat up late and got some writing done (about 3000 words), slept and was up again at 0600. I wandered down for breakfast (al fresco) at 0800 and was served a cup of coffee by a chap who had no idea what I wanted. I figured that even though it was a working day that I was up too early for these people. It is now 0900 and I see (by leaning out the window and peeking under the bougainvillea) the breakfast bar being set up so my initial assumption was not far off the mark.

There is a church around here somewhere with two, no, maybe three bells. They bong out at a quarter to the hour and they make me laugh. There is no rhythm to them at all. It’s as if someone has wandered along and given the ropes an idle tug. First one or two, oops better pull that one as well. They lurch into motion then drift to a stop. It’s a pleasant sound.  As a kid I used to swing off a bell rope at 9:20 on Sunday mornings. I recall being startled by a (non church going) woman who accosted me at the shop and told me she got out of bed and put her egg on when she heard it ring. I had been away and the bell had not rung and she gave me what-for for the lapse. The joy of living in a small town where everyone knows who rings the bell! Strange thing was I don’t really recall it being a long term thing in that community.  It had been in disuse for many years until my uncle and father got up in the steeple and discovered the timbers were in good condition and the rope was safe to swing on. A few beer bottles were found up there too. Apropo nothing.

I manage to push through the jet lag that suggested at 0900 I should go back to bed, helped by some Starbucks coffee and a walk. Sydney time is 2 or 3 in the morning so I guess the body is still struggling. The city is more awake than I saw yesterday and I get in a good walk. I wonder what everyone does for a living as there seem to be an unusual number of people just drifting around the streets doing not very much at all. I still have not found anywhere that sells maps so I am trying to get my bearings, with the help of the not so helpful Lonely Planet maps. If there is one area that publishing house should fix up in their books it is their map resources. A joke I tell ya!

I read often in Herb and Netta’s letter how the winter months could be depressing in Lima if for no other reason that the city is perpetually covered in cloud.  They would get away to places on the weekend on thirty miles away just to catch some sun. They took up “sun bathing” for the good of their health. I can understand why. Perhaps the lack of sun partly explains the shuffling dreariness of the people.  They drift around in their black jackets and look hunted. Mind you I think that was me in the markets a little while back. I noticed a young man circling back on me a couple of times so I cleared out after getting a few pictures. In those close alleys and lanes it is hard to watch your back and would be too easy to get rumbled for whatever they thought was valuable on you.

But it is an interesting place and there are new sights and sounds. Like the hummingbirds that are as tiny as I have ever heard them to be and as cautious of a camera as any bird might be five feet off the ground. I bet their cat antennae are finely tuned (haven’t seen a cat now that I think about it, only a bazillion dogs and their latrizillion turds).  The bird sports a mighty impressive sapphire green throat that does not show up well in the photo, but it captivates me for a while. His Harrier hover is jsut as impressive! The locals spot me for a stranger and have a grin.