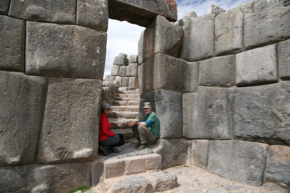 Sacsayhuaman (something like “sarc-say-wha-mahn”) is an Inca site above Cusco which we visited today. The team is mostly in good shape altitude wise and managed the 200m lift in altitude to this modest hill above the city without any drama. However some are still feeling a tinge green. Hopefully another nights sleep, tomorrow’s descent into Mollepata, and the fact that we are camping at Cusco altitude later in the day should mean everyone gets another two nights of acclimatising. I am hoping that helps since we do need to get everyone over that Salkantay Pass the following day. Having said that, there is a Plan B for anyone who is forced back by the height – a bus trip back to Cusco, up the Sacred Valley and meeting us at Machu Picchu in five days time. (The Machu Picchu site is significantly lower than Cusco).

Let’s not be too distracted by altitude. The visit to Sacsayhuaman was inspiring. It is one thing to see the pictures of the stonework, quite another to see the precision of what has been constructed – all that interlocking stone supporting and tying each to the other. Remarkable really. But here is an interesting thing. That precision stonework is not an Inca innovation – they nicked it from a group in the south of their Empire who had this skill well established. The genius of the Inca was to assimilate skills and talents rather than rub them out as they expanded their empire. That ability to raise earthquake proof structures in mud brick is another example of pre-Inca engineering which the Incas borrowed and assimilated and for which they are generally given credit.

The day started by rounding up anyone who wanted to get some exercise, some altitude and some Inca insight. We ambled down to the square then took a cobbled lane that lifted us up to a church half way up the hill beside which sits an open viewing platform. It commands a great view of downtown Cusco but the small time craftsmen and the occasional lady in bright, traditional with a llam in tow congregate to catch people like us walking to and from the site above. Despite the traps we paused – no need to any harder than we have to for that air – admired jewellery, resisted attempts by ladies with llamas to graft money from us by tricking us into taking photos with them first, then turned and slowly ground our way back up the road we explored yesterday. Shelby was still suffering some altitude problems as we ascended, breakfast and other ingestions returning to the open air. But she shuffled on and joined us at the top where, after buying tickets we walk through some trees and out onto open ground to be met with a view of walls and mounds of huge blocks of stone. It’s impressive right from the start.

We drifted around the site up there, took time to enjoy the view over the tiled roofing of Cusco, and from this vantage point to admire the flights dropping into the airport, descending below saw tooth ridgelines and doing that tight turn we enjoyed a couple of days ago. But having checked out the view, it was really the scale of the site and the opportunity to get up close to this phenomenal engineering that was most memorable. Sacsayhuaman is spread over a hundred or so acres that I could see, and may even have spread further. The natural contours of two mounds separated by a shallow gully have been built up, the gully forming a natural sort of amphitheatre surrounded by granite walls, the remains of buildings and revetments. We marvel at the drainage. At the way the stones are cut to mesh not just on one face but in all dimensions. At the sheers size of the blocks of smooth rock. And at the fact they are still here in such an untouched state. Stand in a stone pathway, under a door lintel and imagine Inca families moving around you. It’s easy to do in such a place. We walk slowly though doors, down stairs, through lanes, and across open spaces and wonder at how many people lived here and what they might have once done. This is after all the centre of the Inca kingdom, the ‘belly button’ as they so eloquently referred to their own capital of empire.

We find our way out of the site, walking back to Cusco via a steep little ravine marked by a stream that has incised its way into the rock and carved out a bed that in some places drops steeply out of sight. Even as we walk down the stone stairs it’s easy to imagine the Incas walking the same path into town. At the gate at the bottom of this path we stop for maize. We demur on the cheese but eat cobs with kernels as big as your thumbnail. White kernels that were hot and sweet and fleshy, unlike any corn I have ever had before. Followed by an icecream of course.

The morning vanished quite quickly and before we knew it it was early afternoon. Kavitha and I wandered off to admire the Inca museum. Havng just seen those ruins we were keen to learn a little more about the people who inhabited them. But like the museums I had previously experienced in Lima this left a lot to be desired. There seemed to be more pre Inca history than  Inca and no logic, or  storytelling or story building to the displays. Still, we did manage to gain some idea of where and how the Inca sits in South American history. But at the end of the day the best history lesson is to walk over a site such as the one we saw this morning. Who lived here? What did their day look like? What dreams and aspirations did they have? Or is that a luxury only we can indulge now that we no longer have to focus on producing food each day with which to feed ourselves? And what did this place really look like, since what is portrayed, apart from the stone, is still so much speculation.

Our day finishes with a Starbucks and we drift to a decent dinner as we contemplate tomorrow mornings 0400 start. We spend a bit of time separating gear into bundles for the mules to carry, and those bundles we will carry. As much for the mule as possible though to our surprise we have been told the mule is limited to 6kg of our kit. Surplus kit is bundled into bags and locked away in the cupboards of the hostel, behind tiny clasps and $3 padlocks! I wonder if I will find my laptop here when we return next week.