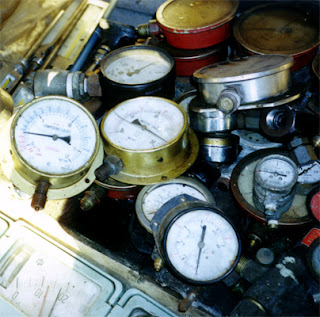 As you approach the beach, the first clues that you are in a unique part of the world, more so than usual, are the large numbers of small roadside stalls selling second hand (and new) ship’s stores. Everything from brass fittings to boxes of toothpaste. The second clue, uncertain at first but rising to a background percussion is the noise of metal on metal. Soft, and in the distance, initially I was not sure what I was hearing. But as I walked over the dune and onto the beach I realised it was the sound of thousand hammers on steel. A remarkable tinging chorus of blows ringing across the water and mud in a rolling cacophony of sound, all blending into the one note but clearly made up of innumerable parts.

And there is no hyperbole when I say thousands. Look north and see dozens of tanker hulls pulled up on the beach. Look south and see an equal number. And learn that these ships are being broken up by hand. Hammer and chisel. On some ships the smoke lifts off the deck where a line of sticky bitumen is burning to help soften the steel before the wedges are driven in.
At my feet is a jumble of metal I don’t recognise at first. Then it slowly dawns on me that the jumble is the remains of the diesel engine. The ship it belonged to has been dismantled from around it, piece by small piece and carried away. As the ship has shrunk it has been dragged further and further up the beach by large winches until all that is left is the engine. In this case, the block was pretty much gone and all that remained were the pistons. Enormous things about a metre wide and three metres tall. And those are finally smashed to pieces big enough to carry as well. (I was warned away from a 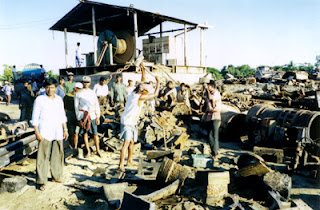 couple of steel ropes lying on the beach. Hooked up to 300,000 tons of ship they regularly snap and the whipping rope takes out two or three people at a time, cutting them in half in the blink of an eye).
Truly extraordinary. It is a place to simply stand and absorb. Even the fact that the movement on the ships is made up of thousands of figures beavering away takes a while to sink into your consciousness. If you are in Chittagong for any reason (there are few good ones aside from doing business with the textiles industry) take a look at the ship breakers, and stay away from the steel ropes. In the meantime you can see some detail on Google Earth – copy and paste these coordinates into “Fly To” and let GE take you there. 22.4218444854 N 91.7348982087 E
August 1999