Sneaking a Kiss in Paris 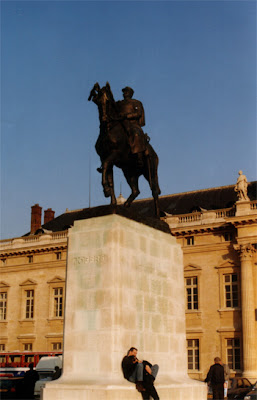 Having dropped the pack in the (tiny) room (described a little more here) and negotiated my way down a set of winding stairs wide enough for one set of shoulders at a time – and even each of those was pressed against the flowered wallpaper on each side – I stepped out into a classic Parisian scene. It was a warm spring evening and the lowering sun was still in the sky, highlighting the new foliage and adding a warm yellow to the stonework and concrete. The smell of coffee, the sound of conversations of those on the side walk taking their leisure and the wide boulevards nicely reinforced just where I was. I legged it for about 17 kilometres that evening and covered a lot of Paris, from checking out the Notre Dame, walking a few kilometers along the Champ Elysees, wandering the art along the Seine and sadly being forced to avoid the queue at the Eiffel which stretched forever, and seemed to be made up mainly of rowdy American teenage school students. That deterrence proved a boon as I discovered a number of parks and gardens in which I was able to slow down – I was running out of steam and drifting in the general direction of the hotel. In so doing I stumbled over this statue of Joffre with the reclining couple having a quiet pash on its base. I grinned to myself and snapped the picture. Marshal of . Hero even, for stopping the German armies in 1914. Symbol of all things French and martial, nicely counterpointed by symbols of indolent love, careless encounters, and in the spring. It was for me a nice vignette of all the clichés, and realities of Paris and France.