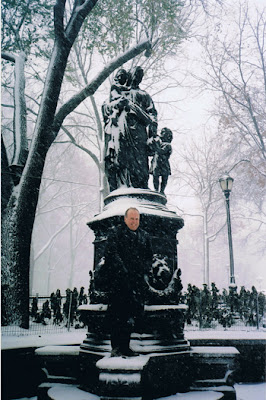 We made it to the meeting this afternoon after scrubbing up and brushing the light dusting of snow out of our hair. But were feeling the cold. After slushing and sliding our way down through Manhattan we made it into the hospital and into the manager’s office. It was on the fifth floor which was not very high by New York standards but far enough above ground to get a good sense of the canyon streets running through this place. Fortunately I was not doing the talking (well , not much). And I was seated with a view down the street while our client was sitting with their back to the window. In the two hours we were there I watched the snow get more and more horizontal, faster and faster, and thicker and thicker, until I was unable to see the other side of the street. As we stepped back into the street the snow was cutting our faces and there were hardly any locals out and about. Sensible people. Carey stopped here for a frozen pose in the Washington Square Park before we ran for a diner in Greenwich Village were we were meeting up with friends. As we thawed out we sat with slack jaws as we watched the snow howl up the canyon – you could not see past the kerb by now. Poor Carey made the mistake of heading for the bathroom just as we were finishing up. Out of his overcoat by now and dressed only in business attire we convinced a Mexican waitress (who had served us ground up, raw Chihuahua (or so we were convinced, it was so awful)) to let Carey know we had headed off up the street. Taking his overcoat we then propped in an alcove and watched an exasperated friend step into the blizzard, put his head down and trudge out of sight into the whiteness. We counted to ten, then ran after him, catching him looking around for his sense of humour and somewhere to buy a new overcoat. He had decided he had lost us in this Alaskan wilderness whiteout. Fortunately he found his sense of humour in one of his overcoat pockets or somewhere and we spent the rest of the afternoon following in the footsteps of Amundsen as we alternatively froze then thawed our way from cafe to cafe, bookshop to wonderful bookshop and finally found our way back to Times Square, tired and cold but as happy as ten year old boys in a puddle. Which was about the sum of it!!