Reflections written on winters day, overlooking , . The character’s name is Ahmed. He was deported and found himself imprisoned, then exiled for his faith when he returned home from . He was seeking political asylum. Written Winter 2004. 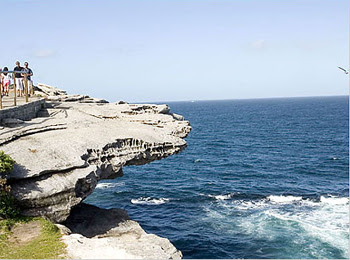 The wind whips around here without any savagery. But it thrubs and beats at everything in its way. The ting ting ting of a rope against a flagpole is percussion to the softer swishing of the wind in the saltbrush, flax and beaten up tea tree which line the cliff top. In visual sympathy the sea throws itself on the broken sandstone below but the beat of the wind drowns out the sound of the water. Waves suicide in great gushes of foam and exclamation but do so silently. Across a blue green ocean, sprinkled with points of white the occasional sail tacks without progress into the breeze while others appear so quickly and vanish in moments as they travel with it. It seems there is no possibility of a speed in between. Above it all, smiling and kissing all it surveys drops the sun, lending to the scene light and life and vibrancies not found in an overcast winters day. Today is clearly God’s day and he is jolly well pleased with what he has laid out for us.

He used to come here when thinking about his family. Or about his immigration application and the many years the government had found apparent good reason to ignore his pleas. He told me the place offered him some solitude, away from all those who promised, and even delivered help but who clearly were not able to advance his cause. Here the wind was his friend and he would stand here and scream into the gales, shouting obscenities in more than one language at his creator, demanding more clarity in his life than the elements or his funds could offer. Pushing his body into the breeze he would hang a foot out into space and tempt God to switch off the updraft and drop him to the rocks below. The wind would continue to blow and eventually he would carefully withdraw his foot, quiet his voice, creep back to a park bench where he would weep the tears of the grief-stricken. And then the tears of the penitent for he firmly believed his God was his friend. And then the tears of a child, uncomprehending tears and those that flowed in the full knowledge that, regardless of the shouting and yelling the world would keep turning and nothing was about to change to his advantage in any time soon.

After the tears came the most difficult part of the communication ritual – returning to his lodgings where he faced the quiet serenity of his landlord and the quite obvious lack of empathy. Worse, his lodgings were temporary and reminded him of the boot camp existence of his previous life, twenty years earlier. Single bed, no decorations which hinted at a family or friends. Back then the dormitory existence had a reason. He was there to fulfill a national calling. And he was among friends who suffered, enduring and exhilarated with him. But here, in a foreign country he had a single bed in a single room, a single faded photograph of a distant brother and none of his wife or sons and daughters.

He told me once that even though his yelling and shouting at God was, after the event, something he was ashamed of, it was at the very least a form of communion, a time when he felt that someone out there was listening and saying “I know how you feel.” In so many ways the most difficult part of the communion in God’s windy temple was not the rage and despair but the leaving of the place, to return to an abode symbolic of his seeming empty lot in life and in which he was not able to vent any of his despair. Back he would trudge, pause at the front door, square up his posture, fix on a smile, then ease himself in, hoping not to encounter any other tenant or his kindly landlord. They were all beyond words in these moments. This was not home. Home was on the other side of the world in a regime that professed constitutional freedom to a person like him who wanted to believe in God but which separated him from his wife and children the moment he confessed to holding to that belief. The repeated tests on the cliff tops above the beaches of north were to determine if the God he worshipped was going to claim him. He never did, in that suicidal sense, but claimed him in the end in a more comprehensive way. Ahmed does not live the life he expected but lives it now more fully, by his own admission, than he ever expected.

When I pass it, or on occasions that I stop here, like today, this cliff top is a reminder of his life and friendship in . Especially on a windy, winters day.