Sydney Has itself An Indian Summer 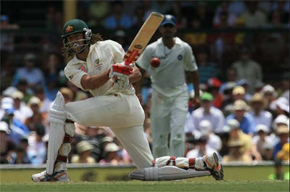 Memories of summers in younger years always include rounds of cricket. In the driveway. On the beach. At a picnic. School days. Games against Waitaki Boys High or St Kevins where more passion than technical skill invariably led the play. Later it was getting down to the Melbourne Cricket Ground (MCG) to watch the test against England or, in those heady World Series days, to go and watch a fast one day game. All those days came back yesterday thanks to Da Xiang who dragged me along (most willingly) to the first day of play of the Second Test against India.

In a game that is played out over 5 days there can be some drama born of strategy. That is a matter of perspective too – some find a 5 day game tedious. But there were some scene setters yesterday that created their own drama. India had not performed well in the first test and the crowd smelled blood. There has always been a lot of combative tension between the two teams (never as much as when either of us play England I would hasten to qualify) and that had an edge to it in the recent round of accusation and counter accusation between players about racist remarks directed at them when touring either country. When Andrew (Roy) Symonds took the crease we all secretly hoped he would belt India around – he had been the subject of some degrading comments when in India last. So anything he did out there on the paddock was watched with avid attention. That he was the days top scorer was especially sweet.

Above all the test games over summer, and especially in Sydney, are a social phenomena. Everyone is on holidays. The afternoon blows in the humid sea air. People soak in the sun. Drink beer. Lay back and enjoy themselves. The sun sparkles. Flags snap. The crowd, which yesterday included the Prime Minister chatting with Hugh Jackman, rumbled and roared and entertained itself when the pace slowed. The Sydney Cricket Ground (SCG) is cosy enough to feel intimate and its easy to connect with the crowd and the game. Sitting in the sun on a warm afternoon taking in the cricket, listening to Australian fans and the “Swarmy Army” roistering for India was all a summer afternoon should be.

There is a taste of the day on YouTube – check the video clip in the right hand corner of the blog (Featured Video) or click here.