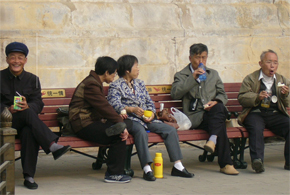 If you have ever had a video camera fixed to your eye at an airshow, or at the car race track you will understand what I mean by the camera trap – so fixated are you on capturing the moment (to be stored forgotten in your camera) that you miss the real experience. When filming or photographing people that loss is even more profound. That is what happened here.I was being guided through the Forbidden City in Beijing. According to the China National Administration of Tourism; China Statistical Yearbook 2003, 878 million domestic tourists moved about China in 2002. If you visit Tienanmen Square and the Forbidden City in summer you could be forgiven for thinking most of that number were walking through the place with you. In places you shuffle along with a bazillion other shufflers, pressed up to you front and back. Most of them are weathered, simply dressed folk from the far flung places of the Dynasty, here looking in wonder at their history and capital. And each other. To escape the pressing throng I was taken by my guides to places in the Forbidden City which were less trafficked but no less interesting. And as we walked around a corner we bumped into a handful of peasant travellers who had found a quiet spot and were enjoying the lunch they had brought along.  It was a vignette I was keen to snap, but not wishing to appear invasive and rude I hastily took the photo and moved on. Too late (the next day) I realised one of the gents had engaged me in a beautiful, open smile that in the ordinary course of events would have invited a hello and a conversation. But I was so busy framing up the shot I did not even notice him there. Each time I look at this photo I think about an opportunity lost – what was his name? What journey brought him to the Forbidden City and was this the first time? Where was his home town? What was his history? Our orbits swung past each other, each from galaxies so far apart neither of knew the other existed. But he extended an invitation and opened himself up, and I was dull enough to not know he was there until I checked the camera the next day. We remain unknown to each other and that smiling, inviting face reminds me it was my fault all along.