The Genie of Fez Goes Shopping 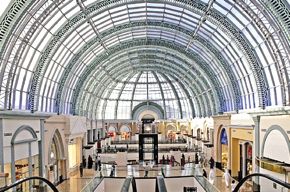 Othello sits on the edge of a fountain, his white thobe draped across his knees on which he has placed his outstretched hands, elbows locked. He gazes about as if in surprise, his dark eyes catching and reflecting his wonder. Above his white keffiyeh prancing horses rear out of a fountain, clearly confused about their pedigree –a mix of romantic French design and crass imitation, modern, faux classical Greek. It fails on every count except one – the sound of the water is soothing, drowning out the chatter of the peasant and the awful piped music. It helps ease my migraine as I wash down medicine with a thick cup of chocolate and try and prevent smoke leaking from my ears. That time travel is so damn inconvenient and painful. I distract myself from the firebrand lanced though my temple as I watch Othello. He’s lost in the grandeur and vastness of the atrium in which he sits, the brightly lit dome ceiling of glass and faux iron vaulting a hundred feet or more above him. But he is barely seated on his pew when he is greeted by fellow worshippers and they embrace, adjust keffiyeh and agals knocked askew in the passion of their greetings, slap palms and knock knuckles before they shuffle off. It’s the curse of these sandal wearing people, that they slide their feet along least their thonged footwear comes loose. Jeanette could care less and tells me not to fuss but I could tolerate a little more care and precision and less sloppy walking. I must be getting old.

Fellow worshippers? Worshippers? Indeed they are for we are in a temple and the gods of the well lit alcoves that line the aisles here are bright and shiny, alluring and seductive, and well known to be absolutely essential for the soothing of the soul and for giving true meaning to life. How are the worshippers so assuredly of this veracity? It’s simple really. Their neighbours are clearly at peace, surrounded as they are by the things they own. Shiny and sophisticated things given up by the gods in this place. And their extended families are content too. And should they be just a little bit uncertain about the truth of this religion the messages from the high priests of the shiny things, most of whom have descended via the avenues of the fifth and seventh heavens, come flocking to the temple too and I in so doing validate the spiritual claims those gods make. White skinned high priests and priestesses, wearing the sophisticated things or, if more soberly dressed, still thronging the temple and occupying every nook and apse. Hundreds and thousands of them admiring the gods and gazing in adoration. Clearly at peace with each other and with their neighbours. And clealrly delighted and soothed by the gods of Fauchon, Chanel, Verscae, Canali, Massimo Dutti, Zara, Bossini, Bvlgari, De Beers, Gucci and Prada.

There are layers of heaven in this temple I should hasten to add. There is always a hierarchy of gods you know. Some are the kings and queens, others are placed lower in the courts, and some even exist outside of the spiritual courts. Why is that do you think? I have my own answer to that. I think that these pantheons of gods are structured so my human friends can better understand them. These worshoppers understand and relate to courtly hierarchy of gods.. These gods, the exalted ones as well as the more lowly are those who will deliver them meaning and reason, contentment and peace. But if the pantheon of Greek and Roman gods were a fickle family or two (I’m sure I have met some and they were a demonstrative and scrappy lot) these gods are demanding in the extreme. They need constant and regular and unremitting worship and adoration. Those representations of the gods visible last year are no longer, and the new visage demands fresh love and affection. Each and every year. So the worshoppers watch closely in case the gods shift their countenance. They come here day after day, pay homage and worry with a gnawing feeling that they had not adored enough. And if not enough then perhaps the peace and meaning they crave and so earnestly seek might slip away just as they think they have discovered and gained it. Vanish between fingers slippery with the sweat of their laboring worshop, lost even as they grasp it.

Here is the strangest thing. We jinns are not supposed to comment, just watch and on occasions do. And okay, sometimes I intervene. But you know I think about these things and I will comment as long as you promise to not tell Jeanette. The strangest thing is that these worshoppers claim to worship other gods. Many in here wear the garb of those who follow the prophet Mohammed., like our friend Othello. Many follow the name of Isa though not those who live around here so much as those priests and high priests who drop in from the western heavens and lead the worship here. Isa, that prophet who died and then confounded the demons who flit around me by raising himself to life again even as his body swelled and started to stink. He always seemed like a sure bet to me, for anything the demons avoid has to have something going for it. Yet those who say they follow Isa have their heads turned by these shiny gods too. I have found few who can resist their seduction. And my humour is tickled by those who say there is nothing in the world worth worshipping and who subscribe to no prophet, and even those who deny the existence of anything existential and scorn the utility or need of religion, well guess what. They flock here and worship, bending the knee more deeply and quickly than anybody else. All come here, and all genuflect.

I am amazed that this is such a melting pot of worship, a syncretic mix in the absolute extreme, yet in which there is no conflict. It might well be said that this is a temple of peace. But I do know it is not a temple of contentment, for even as they leave, each worshopper remains haunted by the wondering – wondering about their purpose and their destiny. Surely they have no reason to wonder. After all, by acclimation they all know this is the temple of meaning and of life itself. But wonder they will, soon enough. And in their wondering they rush back to the temple and their fears subside as reason and meaning are shown to be true and so easily available here. All they have to do is pay the gods and return home from the temple with another sophisticated, new and shiny thing to remind them how fortunate they are and how happy they are. Until tomorrow.

I finish my chocolate but I still have a migraine. As my footsteps echo down the aisle I hiss at the backlit, downlit gods, their attendant temple prostitutes and curse their empty seduction. Then I repair to my cheap hotel, lie down, turn out the light and wonder about my own existence and why I am in this time and space.

(*Mall of the Emirates, Dubai)