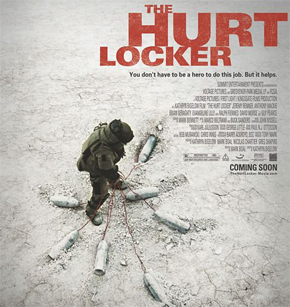 What the heck was I thinking, watching Wolfsissie during the week? What a hopeless movie, starting with so much promise and fizzing half way through. Anthony Hopkins must need to pay off a credit card or something to be dragged into something as bad as this. Anyway, more than offset by The Hurt Locker which was recommended to me during the week by Greg. It’s one of those movies that sneaks up on you, and before you know it the characters have sucked you in and the suspense of the operations of the bomb disposal guys in Baghdad have you immersed in the grit and the sweat of the job. Being very picky, it was a shame the English subtitled street signs snuck in (they exist in Jordan where it was filmed, but not in Baghdad), the hills of Jordan were visible in places (Baghdad is as flat as a tack), the interaction with the British contractors was incomprehensible, as was the ability of bad guys to accurately knock off same British contractors over open sights but a scoped up Barrett 50 cal was not up to the return fire task. And all those black goats survived!

My pedantry is trivial. The movie dared touch on the perverseness of events in that place by showing the lengths some will go to to booby trap bodies, and the forced wiring of explosive vests after the fashion of suicide bombers – though these people are most unwilling vectors. The sane in Baghdad have been trying to get our attention about these sorts of perversions imposed by their own on their own, including children, for years but it is a message no one really wants to hear. How can we – it is scarcely believable after all?

The title? Get whacked by an IED or some other explosive device by being too close and you can find yourself in the “Hurt Locker”. Which is better than being in the freezer I guess.