The Lost Piper of Boroko 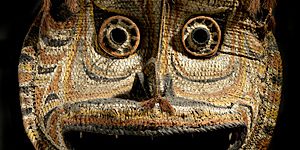 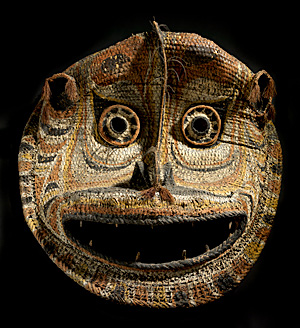 We carefully leave the taxi and as casually and as alert as we can be without indicating our concern we steer through the market stalls and try and avoid the crowd that is being incited by someone on a loud-hailer. All we can hear in the tirade is “Australia” and “rascal”. It is not a savoury combination and we are two white faces in a vast crowd that has the potential to be hostile. That is, we stand out like the proverbial canine reproductive organs. We manoeuvre past craft items that catch our eye but this is a tense place and I am reluctant to pull any cash out of my pockets. That might prove unwise. We moved across the plaza and into a general store, conveniently laid out like one we are used to. We buy two cans of Coke and watch the street as well as the door. No one seems to have paid us any attention. Outside the store is a roped off area with a sign warning “Beware of the Dog”. It’s a sad looking specimen of a German Shepherd, with an ear missing and looking as if worms afflict it. It’s lying on its side panting a fast rhythm in the heat. I have no idea what or who it could ever scare off. I was planning on sending a post card to Miss Betty so walk from the store to the post office but it seems half the district is in there and we are not going to see any service today. But we can check once again that our security is okay. Everything seems alright.

As we leave the Post Office we are greeted by an aggressive “Who the f*#% are you?” It’s hard to read the burly fellow in his tattered shooting vest, rummy eyes and yellow-black teeth, like ancient ivory. We share names in the hope that friendliness will take the sting out of him. It does. He tells us he was a piper in the Army and had visited Australia to play at the Opera House in 1972. I ask him if he has a chanter (thinking he was telling a porky) and he opens his bag to reveal an old and decrepid set of pipes, together with a chanter. I have to start taking him a little more seriously. This old boy can talk and he does so for a long period without letting go of my hand. His grip is the proverbial vice. Amongst a range of seemingly outlandish claims he makes about himself he tells us he features on page 74 of the Lonely Planet Guide (we later discover a whole page is devoted to this man, on page 74 just as he claimed).

Then he became a sniper capable of killing us at 500meters. What with, his chanter? I tell him I am retired air force and I get the usual Army reaction(e.g. you fight from the bar, head home at the end of the day to clean sheets – yeah, yeah, heard it all before) but more importantly I get a connection with him that helps him relax some more. The sniper conversation was starting to heat him up. But he is not going to let us go until money has changed hands and when it does in the finest tradition of the covert craft we pull away and head to the bank. By the time our conversation with him was wrapped up I was acutely aware of the surrounding interest being paid us from all quarters. It did not seem very holy at all and I was getting edgy. But hoping I was not showing it.

We withdraw some cash, check the surrounds from the comparative safety of the bank then head back up the street, circling back to the taxi queue. We duck into an arcade and into a clothing store – I need some swimmers but it is another good way to clean off anyone who might be wanting to pay us too much attention. When we get to the cab rank and climb into a taxi the previously incited crowd is listening to an evangelist! Maybe “Australia” and “rascal” were included in a message about the need for salvation. Who knows?! But around this place you just cannot be too careful.