The Worst Museum in the World 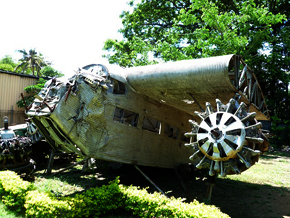 The museums around Ho Chi Minh City can be derelict but at least there is an appreciation of the role various artifacts have played in the history of the city. That is especially the case when you are talking military artifacts. Port Moresby boasts the worst kept collection of military paraphernalia I have seen. And worse, few if any, seem to place any value in its historical significance. To start with the collection is housed in a half block in an industrial suburb amidst scrap metal merchants and timber yards. A Sturt tank sits forlornly behind a high security fence, gun depressed. Literally and metaphorically so. It was in action against the Japanese in Buna and should at least have its shoulders square and be looking proud. Instead it has a dejected air, as if resigned to this lack of interest and love it has suffered in this compound. Thereafter there is little commend the museum, with one exception. But I will come to that. Pieces of a P-38 Lightning sit in the middle of the yard. Other aircraft wing sets and fuselage parts rot away in the humid tropical air. Old bomb casings rust away in sentinel solitude, some old trucks, petrol bowsers, aircraft armaments of various sorts, and numerous engines from various aircraft (a V-12 (Kittyhawk?) and an assortment of radials) are scattered in the open air. The sheds house a Wirraway, a fire truck, a troop carrier and a rusty Japanese helmet is used as a rubbish bin. Thoroughly incongruous are the two Daimlers used by various officials in the 1970s. Both are unlocked and the bonnets are able to be lifted for a quick look. Which reminds me – there was no one about when we arrived and let ourselves in via an unlocked security gate. There was a clutch of ten year old kids sitting in the shade of the Stuart tank but they ran away in a cacophony of squawks and laughter when we first turned up. Clearly they knew they should not be there but they only ran as far as the first corner. They started walking back the moment they spied us getting into our cab at the end of the visit.

The exception? The Ford Tri-Motor sits down the back of the lot, the same aircraft that crashed at Myola and which sat there for thirty years before being airlifted to the museum. Sorry, to the junk yard. The doorframe we found at Myola belongs to this aircraft. I stepped through the gap where the doorframe used to be and immediately thought of the troops that might have been lodged in here on their stretchers. What a relief they must have felt. And what a depression must have weighed in when this aircraft crashed and its support of the wounded removed. You can walk the fuselage to the cockpit and take yourself back to the Kokoda Track for just a moment and feel the place all over again. Having just walked that Track the Tri Motor redeems the museum just a little. If I had not walked that scar and felt the importance of air support in that place there is little here that would have appealed even to this military and aviation enthusiast. But let’s face it, when you are in a country where a man throws a large rock at a woman in the street, and another man is seen, also in public, striking a woman with his huge fist neither of which elicit any neighbourly response or condemnation, there are a lot of other things that need to be sorted out here long before a military museum is brought up to standard.

Our taxi driver on this day had no idea where the museum actually was and needed our guidance to locate this national treasure. But he was kind enough to stop his meter while we poked around. Otherwise we would have been very hard pressed finding a cab in this forsaken street in this forsaken suburb. We fled back to the hotel and its welcoming pool, the driver no doubt thankful for this additional bit of work on a very slow Sunday.