This is so, like…like! 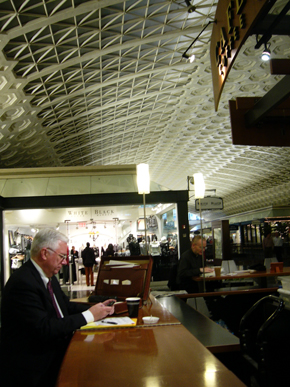 Overheard (not of this guy) at Washington Union Station… “Hi, yeah, it was so like, well… like you know, like… you know. Uh huh, uh huh, No like, I was so, like worried, like, ….I don’t know why I was like, but I was like, really, you know… uh huh, uh huh, No, like he was like smiling at me like! Yeah, like… like!” Snap, hang up. What on earth was that?Now, I know it is a generational thing but over the last week, as crowds of some of the country’s brightest swarm around me in the evenings as they pour down from Georgetown University, swamp the Starbucks at Barnes and Noble (there is a money spending trap only half a block away of which I am wary!) I am constantly amazed at the inane use of the word “like”. This is not the occasional use of it which is fairly common around the globe (OK, my only reference is the UK, US and home) but I hear its complete infusion into a sentence until that sentence is barely comprehensible. I can only guess the audience is not really paying attention, or were witness to the thing being described, (or rather spoken about for none of these overheard snippets could be described as descriptive), and do not need anything usually contained in the power of words to help them comprehend. Whether at the Metro station, walking up M Street in Georgetown, sitting on the train, checking mail into the Post Office, taking a coffee at that Barnes and Noble place (only coffee), it matters not where my ear is tuned I hear nothing but the abuse of this poor word. I pity anyone sitting on a wiretap on these people, for interpreting what was going on would be nigh impossible. My only consolation that its over and misuse will go the way of “groovy” and “cool” and as with those words, will like, eventually find its own equilibrium.

p.s. how impressive is that vaulted ceiling at Union Station?