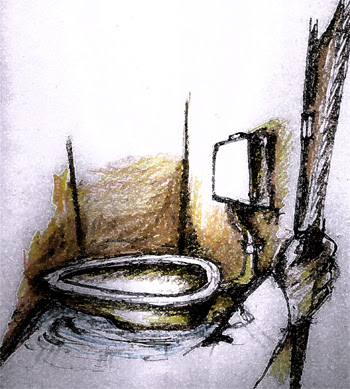 Bangladesh is the last place in which you want to be afflicted with giardia (this blog refers). Especially when the toilets are usually a hole in the ground. While recovering under some unknown medicine administered by my friend Zia, I kept within a short sprint of the hotel toilets, or at least something civil. I cared less if they were soundproof -that consideration had long fled after the bowels had dramatically erupted at the beginning of the trip. But I was worried about my flight out. A sudden attack of cramps, and the need to pass a stream of liquid the consistency of water came only with 3.6 nanoseconds notice. Not enough time to even undo a seatbelt. With a sigh of relief I managed the flight from Chittagong to Dakhar without mishap. It is about an hour. Then I was worried about the two hour wait to clear immigration. Again no mishap.
But as I waited in the departure lounge the urge hit me and I bolted for the men’s room, grabbing a passenger list from off an unattended counter. (I was guessing there would be no paper). There I was confronted by a single toilet stall with a ceramic bowl. The alternate “hole in the floor” squat was submerged under two inches of water (this is an INTERNATIONAL departure lounge for goodness sake!!) The western ceramic bowl option was not much better. The cubicle was also under under two inches of water. Literally. My shoes and socks were soaked. But the complicating factor was the position of the bowl – it straddled the stall. To sit in it as presented to you was to invite falling in. All of this seen, and options assessed in 2 nanoseconds, while hands fumble for the belt, random thoughts contemplating how to keep the suit dry given the flight we are about to board, while other brain function is trying to juggle briefcase and laptop case.
Finally perched facing the stall of the wall, trouser hems pulled up above the calves, rest of trousers caught at the knees. Laptop and briefcase perched on the knees as well. Water now soaking into your shoes. Of course, being a western toilet there was no hose. But nor as there any paper. As I had anticipated. Unfortunately I had dropped the passenger list in the puddle but printer paper is not absorbent anyway and tends to only smear things around. I sat there for a few minutes contemplating whether or not Thai Air would let me on the plane given the odour that was sure to rise off me. Suddenly it occurred to me that I had a newspaper in my briefcase. One from India, and Indian newspapers happen to be printed on the softest tissue on the planet. Sadly it covered the business activities of a business colleague in Hyderabad. He had kindly pressed the article on me and I was happy to accept it. Boy was I happy to accept it – now! I waited until my name was paged before carefully using the paper, reversing the juggling and balancing act and tip toeing out to the lounge in sodden shoes. Thai Air were fantastic – I insisted on a seat right next to the toilet and they did not argue. I fancy the wild glint in the eye did the trick but it may have been a stray odour after all.

Self Diagnosis in Bangladesh
February 13, 2007