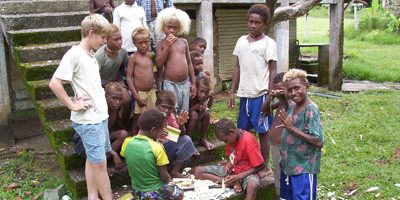 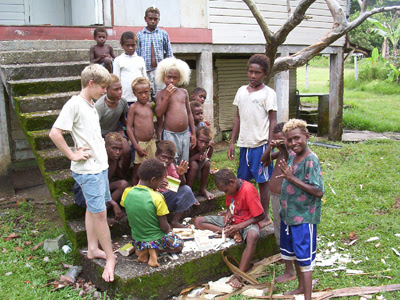 We drove into the night from Auki along a track through the jungle with no lights. The sky was a heavy velvet blue drape that gave no sense of where we were or what time of the night it was. We forded creeks and crept past silent villages, thatch and lattice barely visible in the starlight. The cabs of the trucks were silent as we wondered at what we had gotten ourselves into. After the bustle of the the last few days getting everything loaded onto the ferry, this silent, reflective trip seemed very surreal. Nearly three hours later, after finally finding ourselves on a slightly better road we stopped in an open space at the steps of a white house that looked vaguely out of place in this dark jungle. White clapboard, tidy blue framed veranda and a tin roof. After the quiet trip we were all like boisterous kids as we found beds, moved food in and set up the mosquito nets. And discovered that it was now three o’clock in the morning.

I woke after the sun was well up. A couple of the lads were still snoring away but Mick was gone. I shuffled outside and saw him on the far side of the clearing talking to one of the local men, both beside a large tangled heap of timber. Turns out it was all chainsaw cut 4 x 2, intended for us to turn into the clinic building we were supposed to be working on.

The place is an old leprosy mission site, built in the 1920s but now gone to ruin. Some timber and stone buildings remain, and one clinic was rebuilt, but the main indication that things used to be different are the crumbling concrete slabs that mark where the leprosy mission buildings used to be. There is something sad and ghostlike about the place. But behind the house we discovered we are a short walk through the coconut trees to the beach, where we could see, to our amazement, dolphins playing in the water. We also found a crowd of boys who were very adept with their machetes, chopping palm wood into toys. In this case a small car, complete with wheels which turned. Even the axles were made from palm wood! Kids with swinging, whacking machetes though – this will be an interesting couple of weeks.