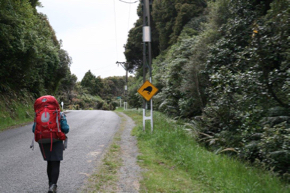 On last light , which at this latitude is about 9.30pm, two parrots arrive on the roof with a clunk. A few minutes later the older of the two shifts to an outstretched arm of one of our neighbours and chows down on a piece of apple. It’s a silver domed, bright eyed, ruby red bellied Kaka, with a wicked scythe of a beak and a raucous call. Soon one is on our arms eating dates from scones Barry brought along. The second, clearly a fledgling, is not so confident about the interaction with humans and fluffs its feathers, arches its neck and screeches its protest. Its parent, if it is such, pays no attention and gently and calmly works on the fruit it has so delicately taken from our fingers.

Barry brought the scones over on the ferry. He arrived with Alison, Jana, Kathryn and Anna, but also with Mum and Dad on the 6pm run. We watch from the Oban  jetty as they pull in and it’s a tickle of pleasure to welcome Dad back to the island. We are all pleased to be here again but I suspect none more so than he and mother, who were engaged here in 1959. We (Kavitha, Dylan, Chris and I) had come across earlier in the day , landing at midday. We left Bluff on a chilly morning but it was a clear day. As we plugged across the oyster beds that stretch out in to Foveaux Straight we encountered a gently rolling swell but nothing too precarious. But it was a source of some amusement that the day was completely clear save for a curtain of grey rain that stretched from one end of the island to another. But by the time the thrumbing diesels were throttled back the rain had cleared from Oban and we arrived in sunshine. Many of our fellow passengers were ‘birding’ and the clear arrival in Oban was to their vocal delight as they stood on the stern and pointed binoculars and strained in the direction of a clump of feathers the rest of us could not see.

Having arrived a little earlier than planned (our service had broken down so we were shunted onto another vessel)  we did not expect to be greeted (and were not) but started walking up the road to our digs. They are about three kilometres away but we didn’t know that as we set out. On the way a ginger haired boy about twelve flew past us on his bike and gleefully greeted us with a shouted hello and a wave. We caught up with him a little later and he explained to us his desire to catch whitebait as he stood tipping forward with his net and threatening to fall into the creek over which he hung. Despite his understanding of the theory of catching whitebait he was having little success catching those tiny fish. He seemed to care less. Mucking about in the creek was the main thing. I catch his spirit and revel in the abandoned and joyous nature of his character. He won’t know how fortunate he is to grow up here but one day he will hopefully look back and thank God for a great blessing. We continue to trudge along the coastal road, though the little boy in me was keen to stay in the creek with our new found friend. We admire the bush and the ocean and wonder where our accommodation really is. Over a small rise and down to a beach which seduces us with its yellow sand, silver metal calm water and the slow whoosh of indolent waves coming to a final stop. As we move along the road, say hello to others walking the other way (this road takes trekkers to the start of a track that cuts around the north of the island) we hear a car slow down behind us. It crawls past and comes to a stop just ahead. It’s Ian. He arrived here yesterday and has spent the morning on Ulva Island and has just returned from that side trip. It’s very good to see him and he chats as if there have been no years apart. Perfect timing as we accept his offer of a lift, gladly so since we have gone from chilly to very hot and sweaty. The sun is out and we have warmed up very quickly. Dylan and Chris have pushed ahead and we have dropped behind as we have discussed whitebait hunting and admired various birds that have crossed our path.

We have the afternoon to ourselves through Chris has just heard his Mum has passed away so he is rightly distracted by the need to re-manage, re-organise his flights. We see him off on the ferry shuttle that brought in Mum and Dad and the rest of the team. Before he leaves we have some time to indulge blue cod fish and chips, drive out to a number of bays and inlets and otherwise expose Chris to as much of the island as possible. We’re sorry to see him go but he has no choice of course. I feel for him – he was looking forward to this trip. And I too, for its been a while since we have trekked together. I do wonder what the trek will look like without someone up front I can rely on to make sensible decisions. Many of the NZ crew who have joined us profess to little experience and some are trekking for only the second or third time. Despite that I’m confident we will be okay and my concerns are fleeting. Kavitha has done lots of trekking. Dylan plenty. And Alison lots as well. And even though some of the others say they are not prepared for this they are mature, and I anticipate decision making in pressure situations shouldn’t be an issue.

We finish the day with the sun shining across the bay while we eat yet more fish and chips at the local hotel. We sit outside given so many other island guests are crowded inside and the dining areas is closed. Must be a NZ thing – close the dining section at 8pm sharp. The wind keeps things chilled and eventually chases us back to the Rakiura Retreat where we have our Kaka conversation with two very vocal birds. Barry and I talk until 11.30pm. There is a lot to catch up on and I enjoy the conversation immensely. But we eventually call it a night. So much to catch up on but never enough time. I drop off with the usual “what ifs’ swirling around in my head but I am very ready to get started. Once we are walking the what ifs will vanish. The homework is done and it’s been done well.

Next Entry (4) One Robin