In 2005 David Paton, good friend, mentor, example, and inspiration died after experiencing an aggressive cancer. I flew to New Zealand to attend his funeral. On the flight back I started writing some notes that were intended to capture something of what David meant to me. Taking a deep breath I thought I would share them more widely here on this blog. They are less coherent than I would like but they tell a story of what a difference one life, honestly lived, can make to those around them. These notes are offered up in 15 chapters which I will post out over the next few weeks. And in order that you can put a face to a name, here he is, on the Stewart Island ferry, catching some “zeds”. Or “zees” depending on what part of the world you hail from. 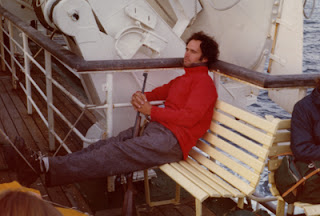 Many of the memories of times with David relate in some way to vehicles. Somehow there was never any real affinity for, or affection for things mechanical although he was as adept at repairing them as any other farmer. But they were just tools and functional items that had a utilitarian purpose. Despite that there was one vehicle that has very fond memories for me. There was a very old Ford David drove. I think it actually belonged to his Mum and Dad. Its heater hung by wires underneath the dashboard, swinging precariously. But it worked. The door locks did not. I travelled on numerous occasions in that green machine with binding twine (designed for baling hay) stretched across my lap, the twine tying the two doors closed. We loved travelling with David in that clapped out thing to and back on Bible Class trips. Usually with only one headlight working we wound our way down to Moana Pool, swam, bought fish and chips later then ate them up at the lookout or steamed up the car with them as we drove home. That was very special. Indeed, I want to tell you more about those times but they have faded too far, leaving me only with a warm recollection of being wrapped in the warm embrace of a toasty but dangerous car, and in the care of a bunch of older men who were quite accommodating of a couple of kids wrapped up in blankets in the back seat. David and the other young men used to compete with each other to see who could detect an oncoming car before anyone else. It took me a while to twig to the best clue – light gliding along the telephone lines strung beside the road – always hinted at the lights of an approaching car long before anything else.