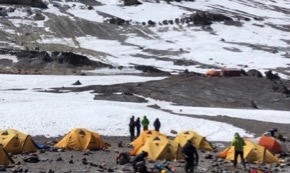 Sunday 18th February
I woke in the middle of the night (1223 actually) to the sound of violent vomiting. Three guys had rocketed up here yesterday, bypassing Camp Canada and no doubt feeling very pleased with themselves. If they were in fact pleased with themselves I’m pretty sure that disposition has dramatically changed. They are paying for their rapid ascent with this state of sickness. They came up so quickly I thought they were porters for a few minutes – those guys have been up and down here for three months every other day so they are well acclimatised. You can’t mess with altitude and the extreme vomiting suggests they have. I heard Eduardo leap out of his tent and move between it and their tent, no doubt dispensing medicine – clue being some gagging and spluttering. Ironically I drift off, then wake at 0300 with a horrible sensation of nausea which does not culminate in any vomiting but which is debilitating to say the least. The trap with nausea is that you go straight off food and drink just when you need to be getting on to it. So I get up for breakfast and stomach a cup of hot water and some dry cake then go and lie down and instantly feel better. Kavitha is not only showing NO ill effects of altitude whatsoever but last night her O2 saturation lifted to 90%.

I woke again at midday and felt greatly improved. I need to get more fluid into me so am concentrating on just that. But drinking when you feel full is tough. And I have to confess drinking litre after litre during the day knowing you will be up every 1-2 hours through the night is bit of a deterrent to drinking at all! However the upside is that we have not been taking acetazolamide and that means the urge to pee is greatly diminished.
One of our team started vomiting this morning and was feeling dizzy (initial signs of pulmonary oedema), while I was having my morning acclimatisation snooze. He has been taken down the mountain by Danilo. They left about 1100. Eduardo is on the radio to Danilo right now but my Spanish is not good enough to eavesdrop the gravity or otherwise of the situation. We will find out in good time. But that scenario is encouraging – to see a quick response like that from our guides underscores the impression we are in good hands.

Those early morning pee stops have the advantage of being able to see a gorgeous sky. And to get a feel for the weather. Once again it was a still night at 4am and quite mild without a hint of breeze. By midday the breeze is up but is about 10kts at worst. Mind you that introduces a chill factor that can’t be ignored and before you step out of your warm dome you put down jacket and gloves on first.

The rocks around here are unique, looking like molten wax has been thrown into cold water – or in this case molten rock has found itself in cooling ocean. The formations are unusual in their own right, suggesting something metamorphic, but in a sedimentary context. I read later that the mountains here are indeed turned on their head, and Aconcagua is no exception, with the lower layers being sedimentary but the top layers being volcanic – though there is no volcano within a bulls roar of the place. Volcanic rock on top – extraordinary.

We have been encouraged by the fact that we can now mostly see the rest of the route to the summit. Tomorrow nights sojourn at Camp 3 is 350m higher up but out of sight behind a large outcrop on our left. It’s located at 5950m so we will be as high as Kilimanjaro when we get there – though camping overnight there instead of rushing straight back down again as we did once we capped Kilimanjaro. The traverse across a sloping field of ice is very visible and we have watched ants moving across it today. At the end of the traverse is a cave in which we are to take a fuel and rink break. We have been urged urged to not stop there since it is only another 200m to the summit. But apparently many can’t get past the refreshment and respite from the wind, despite being so close to the top.

Climbers trickle in all afternoon and soon the place is looking a little crowded. Someone was clearly diligent about his site recce and set up his tent near our poop tent. His colleagues set up around him – they’ll be thankful for that a bit later I’m sure. But being diligent up here is easier said than done. Sudoku is usually done in a snap but at this altitude I have to check the numbers one at one laborious time rather than rely on spotting patterns which is what I usually do. I attempted some mental arithmetic while climbing yesterday, with some simple elevation calculations and found that especially difficult. Got there in the end but I’m not as lucid as I am with a bit more O2 about. Mind you, you should be concentrating on where you put your feet and on your balance, not second grade maths.

The summit looms over us – literally. And mentally now. But we need to focus on the next day only. And I need to be especially diligent with my water intake. 1835 and our tent is being lashed even more so by the wind. Eduardo is waiting for a weather update to determine if we stay another night here and chance the summit or whether we descend. The day started still and clear but now the summit is experiencing 60-100km/h winds which puts an attempt to cross The Traverse out of the question. The weather is always a factor in the mountains but especially on this beast which is notorious for its high winds. But given how calm it has been over the last week as we have worked our way up to the crown is galling. But the mountain will always be there. Eduardo has just stuck his head in the tent and told us we have been hit by an Antarctic front which does not usually strike here until March and rarely this far north. So this front has surprised everyone. Poor Eduardo – his hands are frozen – he’s been sans gloves while on the radio and this fingers are frozen. Met confirms its 0 degrees at our camp at the moment, with 75km/h winds. That puts the wind chill at about -10. The short story is that we will stay here another night and see if the storm blows through in time for us to have a crack at the summit. That will be good for my acclimatisation. Kavitha seems to be very well acclimatised for this from the get-go – no headache, nausea, nothing. Trooper. She is currently reading “The Prince” while her e-book is charging outside. At least I hope it is and has not been blown off the mountain.
Jorge comes in and checks our O2 (mine is 70%) and general health. He’s a remarkably cheery fellow but confesses he hates the wind. He reminds us to just holler if we need anything – then cheekily grins and says “Call Eduardo first.” We have applied as many layers as possible but I am now feeling chilled sitting here writing this so it’s into the bag and good night at 2045. Besides the ink in the pen is freezing up and I’m not sure where the pencil is.
p.s. immutable law of the mountain: the urge to pee increases exponentially as you pull your boots on to leave the tent for the latrine/rock.

First Entry in this Journal