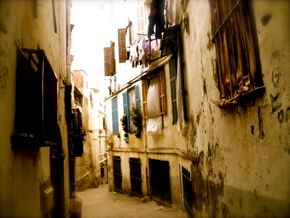 There was a canary called Farouk. He sat in the window behind a dirty curtain installed when the French were in control and trilled his song across a filthy narrow lane three stories above the cobbles. Three tenements down his trill was answered by another, though Farouk did not know his name. Farouk was a little vain and did not think his neighbour’s song anything to write home about, though he was glad of his unseen company. But nor did he know the name of she who trilled from across the roof tiles and in a neighbouring lane, a song he could only hear if the wind was not blowing. On those days they would sing for each other. He would always save his sweetest and choicest notes for her. They were never to be squandered and left to drop on the cobblestones below. He would swell his chest and sing his heart for her, and she for he, though they would never see each other in this life. Up here on the hill the wind always seemed to blow. Cold from out of the north when the days were short and the doona fogs had to be pulled off the city each morning. Or oven hot, winds from out of the desert south that melted the city into the summer copper sea. But Farouk would sing anyway, whether he could hear her or not. For what else could he do?

If the wind was kind it lifted the thin grey material that veiled him from the street and he could watch and sing. And he would watch for one thing only. An audience. For what is a canary song if there is none to hear its sweetness, or Farouk’s inventiveness with the light of his voice? On this winter’s day the wind was doubly kind and his zephyr friends had not only lifted the veil but caught it on a rusty nail. The nail had been there forever, hammered into the timber frame more than a century ago. It was a new fitting in a sea of ancient fittings that dated in its current form to 1503. And it was built on piles made up of the work and dreams of people far earlier than that. If he could have seen above the entrance to his lane he would see the crumbling citadel, pride for some archaeologists, who beamed their work in the wet shine of their poverty stricken eyes, for its 1516 origins. But it was a public toilet for the poor and the careless of which there were thousands.

Farouk, blissful in his ignorance, looked where he could and on the cobbles below him he caught a passing parade. For them he would sing. And practice for the days when she could sing back. Sing for the two boys, brothers, who sat in companionable conversation on one of the many steps and who welcomed a stranger. Who laughed with the foreigner in two or more languages and gave the visitor something of themselves. The visitor was warm in reply and took photos and shouted at other family in greeting and welcomed a friend, a close ami of the brothers. Farouk was glad to see this and sang his song with as much lustre as the cold wind allowed him. It made him glad. Who can be enemies when you are already friends? Who can be strangers when you cannot talk with the same tongue but connect with the language of the eyes and the smile and the heart. Farouk held these things in his tiny, tiny breast and sang his best when he saw them in others.

He sang for the girls who plodded up the thousand steps, arms linked, chatting in Arabic about their boys. He sang then for the old women coming down the same stairs, carefully avoiding the human excrement, heads in close huddle, talking in Arabic about their men. Farouk heard their love and their grumbling all mixed into the same passion and it fired his heart. For these were cares and years that needed a song and he would give it to them, the whole way down.

He paused as the traffic ceased and the lane was silent. The curtain flapped but the nail held its grip. The cold breeze swirled debris up from the lane but not high enough to dust his cage. Farouk tilted his head a little, checked his feathers, aligned his breast, shifted his feet and took a deep breath. This song would require some earnest energy to keep in symphony, because ten year old boys playing tag are the toughest to sing for as they jink and dart about, shouting from this door, from up this ladder, out of that window, dodging the old man with the cane, the playful cuff of young men and the step on which that foreigner had taken a seat. For these young boys he pulled one of his happiest songs. He had a happy song too for the man who laughed and cried out, almost in a delirium, dropping to his knee and kissing a toddler being led by his mother. Farouk’s heart went out to him. The father? An uncle. A kind hearted neighbour? No matter, the tears were currency enough for Farouk and he would sing a little sweeter for that offering.

The sound of death was familiar to Farouk. Many of his fellows would fall silent when they heard and felt it, but he reasoned that mourners need something to cheer them on their way. He watched the foreigner scramble to his feet and step into a doorway as a long winding cortege of silent and somber men bore down on him, carrying the casket of their friend. The wind dropped, the boys stopped running, the women stopped chatting and the dogs stopped barking. Even the ginger cat stopped, sat and tucked its tail under itself as the box floated past on the shoulders of many men wearing their black jackets and their sad faces. Only Farouk spoke and down into the silence of that somber lane floated a sweet and sad and lonely song that saw everyone on their way. And then the cat moved, the boys ran, the girls chatted and the old men went tap tap with their canes again. Only the wind did not stir. Farouk hoped they all had heard something of his contribution to their day. The foreigner looked up. And so did the cat.

When they had all moved on, as all they must, in the silence of the air Farouk held his breath and his tiny chest grew tight. Maybe from across the tiles he would hear her sing. It had been too many days now, perhaps even weeks, for those cold winds were a constant distraction and disturbance as they bustled up these narrow ways. He strained and he strained but here was silence. He tilted his head one way and then the next. Still there was silence. He could hear nothing. But he saw everything below him. And then he saw two young girls follow all those men and one of them held in her cupped hands a small brown bird. The other would look for a box on the rubbish heap at the top of the lane when they got there, then scramble after the men to see what next there should be done.

There was a canary called Farouk. He sat in the window behind the curtain and trilled his song across a dirty narrow lane three stories above the cobbles. For what else could he do?