Waterfalls at Every Height (Day 6) 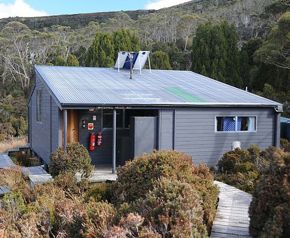 I woke a couple of times through the night and listened for the rain on the roof. Nothing. Only fog at 0300 as I stand in the silence in bare feet on the path just up from the hut. Snow is forecast for the next two days, so says one of the trekkers who landed in here last night. Our 0545 wake up came around too early but it was easy to get going – I think I discovered the sleeping bag was working to its limits and I was a little more chilled than I usually am at these temperatures.  After a rest day we are out of the hut at 0710. That is a great effort – up, breakfast cooked, packs repacked and everyone saddled up. By now we are in the good community discipline of doing this in silence so we don’t disrupt the other trekkers who are not getting going so early. However the school group leader is up at 0600 too, though she rues the fact that we are walking out after only an hour of preparation when her team takes two hours or more. Still,  she didn’t seem too bothered. I think she was just happy that she had such a keen and eager group of students. I was impressed – there was not a single grumpy one among them as they piled onto the hut verandah the previous day and tried to get out of the rain.

We file out in silence and, given the hour, and overcast weather most have their headlamps on. I watch cozy pools of light bob away up the track in front of me, turn right and disappear into the forest.  We cross Frog Flats where I could see bent reeds and silt beds caught in the button grass. Water lies still in pristine mirrors of reflected light all around us, broken occasionally by the soft tinkling sound of water draining away from the flood that has clearly roared over this area yesterday. This is where our friends from last night waded through knee deep water to get to our hut.

The flats stop at a wall of dark beech and a gloomy opening greets us like some sort of mystical portal ushering us into a side apse of large forest cathedral. The greeting verger proves to be a large slab sided wombat who moves with little real care about us and watches us with a stoic studiousness that borders on the comic. That is, until we are about to climb off the flats at which point he gets it into his head that he wants to move ahead of us. With speed and agility that surprises us he bolts ahead, crosses the track just ahead of us and ascends the hill on our right, nimble and agile in a way the belies his hulking grey bulk. He was an attractive animal in his grey winter coat and so at ease in his natural habitat.

The walk from Frog Flats (my favourite name and place so far) took us up through mossy beech on the Pine Forest Moor at which point the overpants went on – by now the wind was ripping across this open ridge and biting us badly. 40km/h winds were forecast. I think they were that speed up there on that moor, with possibly even stronger gusts grabbing at us. But we were blessed to have the weather lift and the sun crack through for a moment and we enjoyed the view from the River Forth lookout. Just prior to climbing out of the forest onto the moor we bumped into a group of school boys looking pretty pleased with themselves, followed by two older gents who were battling the weather but who also seemed to be enjoying themselves. I enjoyed stopping and chatting to both. The teachers of the boys groups told me they were a sister school to the group of girls we met last night and they were trying to keep a 24 hour distance behind the girls. They rued the fact that the boys had noses and tails up and were bolting up the track. I laughed. Of course they were.

We push to Windemere Hut and the team strings out a little, all getting in by 1300. I had allowed 1400 so the effort of the team over these fourteen kilometres was excellent. We stopped here at a very sheltered and picturesque spot. The sun shines in on us and we stand in its glow as our breaths create little clouds of vapour even in the hut. The thermometer says its four degrees in here but we are out of the breeze and that makes this a positive environment indeed. We enjoy a cookup and a hot brew, while some change socks,  before leaving after being there an hour. We are all recharged and ready for the final seven clicks. I agree to split the group and have the fast walkers push to the next hut – I suspect that if we arrive at the end of the day we will possibly miss out on a bunk in the hut. We are prepared to pitch tents but in this blasting weather I would prefer not to do that if I can help it.

The walk to Waterfall Valley Hut is a dramatic push. It’s basically flat but it is almost entirely exposed across open moor. Sheets of rain drive across it and the wind was unfettered. A lot of the track is boardwalk from which the wind made every effort to dislodge us.  It succeeded once when I was not paying attention.

This section of track is spectacular for a whole range of reasons not least of which were the amazing views that blew clear every now and then (high wind is either blowing weather in or blowing weather out) and for the changing landscapes we passed through, whether forest or moor, mud or rock. I enjoyed all of it and comments from the rest of the team suggest this was probably the favourite section of track for everyone.  As I close in on the hut I glance left into the wind and see rain dropping onto the dark, forest topped heights above us. Those forests have then given up the water over dramatic escarpments and waterfalls drop like silver under a grey sky. And the rain washed rock up here shines like so many mirrors on distant bluffs as the light attempts to fracture the cloud every now and then. It rarely succeeds at this end of the day. It struggles and struggles, giving numerous hints that the sun was out there somewhere. It would finally throw a crack of light but abruptly vanish, like a blind being slammed down with no notice. As I plug along battling the wind I think of a toddler waking too early and playing with the blind, allowing flashes of disruptive light in, before his mother slams the blind shut and throwing  the room into darkness again. My head goes to all sorts of strange places when I am walking – often I am ‘writing’ as I walk.

Underfoot is perpetually intriguing. The constant sound of trickling water at every step, audible even above the wind. Trickle, tinkle, trickle. Trickle. It drives me to my own trickle after a couple of hours! But looking down through these moors is its own reward and I am entranced by the mosses submerged in this pristine, gin clear water. And the numerous lakes we pass speak of an ancient place. Twisted skeletons of trees that are as ancient as the moss covered rocks that lift out of dark, tannin stained waters hint at fables and myths and Tolkienesque legends of Old Norse and Old Icelandic pedigree. Yet this area has no recorded history. I wonder what the prehistory of this place is. What happened out here before our modern times? Can we ever know? The moss and lichen cannot speak but their presence speaks only of things ancient, dark and still. They are silent on the human record. I write and write as I go, putting images into words in my head.

The last of us arrived at 1630 though the lead elements were up this section of the track in one hour and forty eight minutes – a veritable gallop which paid off as the hut already had residents. As I finished checking the map and deciding that we had only about half an hour more walking Jim appeared and helped with one of the packs. He tells me that we have dry beds for the night. I am truly pleased. We push along the ridge into the rising wind and the driving rain but there is an extra spring in the step of the team members at this end of trail and I know Jim’s effort in coming back for them has been a real boost for them. We see the roof of the hut for some time as we circle up and around behind it and then finally descend onto its little piece of Tasmanian paradise, surrounded by placid and damp Bennets wallabies and the occasional ambling wombat.

I really did not want to have to set up tents, though the group of photographers who were well ensconced in the hut before Jim arrived were clearly less than pleased to have us descend on them in a blast of cold air and water. Bushwalkers on the track prove to be more hospitable than this lot. Never mind, we are in for a dry night and that is the main thing.  A warm hut is a far better option as it allows a dry and warm start the next day. Note of course that ‘dry’ and ‘warm’ are, by now, very relative terms.  Our night stopover is twenty one kilometres from the start. A big day and one that impresses even the seasoned trekkers we meet on the way.

Now the team is playing cards – Jim has taught them “Shithead” so under candlelight there is some last night relaxing, hilarity and good natured ribbing. Its good to see the interaction between the team – like old friends now. Some had never met until five days earlier but there is nothing like a challenge such as this to weld a team. It has welded nicely and for that I am very content.  We are looking at a ten kilometre day tomorrow and hopefully a climb up Cradle Mountain, weather permitting. After which we will get to Ronny Creek and a bus to some hot showers. In the meantime the nor’wester rocks and blasts the hut and the candles flicker in response. It’s good to be in here.