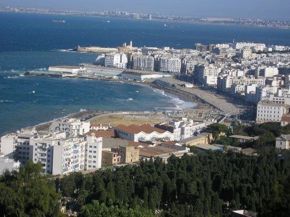 Ha, now I know I’m alive – this place is more edgy than sleepy old Verdun. Taxi at the airport? No such thing. Just Boris the Bullet Dodger and all his dodgy mates in their little, dusty Chevrolets. Yes, Chevrolets. More Cevy compacts than tiny French cars.

How much to the city?

Nah mate. Some bad Española if that helps.

I have some English (Anglash).

It feels about right given the distance into the city and I’m in no mood to haggle. So we walk out past an empty taxi rank and into an ever darkening car park , over piles of rubble and rubbish. We arrive at his dusty little car and he goes around the back and opens the boot. I wait at the front. We get in the car after an argument about my backpack. There is no way that is going in the boot. I am on edge already and being as careful as I can be. No way is that bag leaving my hands. I am now hyper alert.

I pile into the front seat after clearly the rubbish onto the back seat and am in two minds as to whether I put my seat belt on. I clip in once we hit the freeway and he hits 110.  By then we have done some non bank rates currency exchange for some of my euros. Some quick mental calcs (fortunately I had checked rates before leaving Paris) meant he was roughly right but in slower time I think I might have been fleeced a dollar or two – he did well in the local currency of course. Then we are swinging into the back streets of Algiers.

This city was designed by a guy who boiled up some noodles and while they were still wet and soggy slopped them over the drafting table and traced around each piece. Then handed the drawing to the city planners. Add some rat running and we were up all sorts of back alleys and dark lanes. I had long regretted the seat belt, the Parker was in the left hand, the wallet and passport stashed for a fast exit and I was ready to leap on the handbrake. Boris the Bullet Dodger is left handed so if he tries anything I am counting on him pulling something across his body (he is driving in the left seat) which should give me a timing advantage and, if I’m lucky some buffering by Boris himself. So for a few twisting kilometres in blacked out lanes that were seriously ominous I was rehearsing my routine and watching him as closely as I could. He must have thought I was a complete nutter. Whatever. It was a mentally rehearsed, simultaneous left eye for Boris/handbrake grab, belt release (near the handbrake thankfully) , door exit and bolt. Make sure you take the Parker with you – it’s got your name engraved on it for *&^s sake. I am counting on the vehicle ending up out of control though the risk is we pile up on my side and I can’t get out anyway. All of those things run through my mind.  Then we are in streets surrounding a mosque and prayers are just done.  Men are everywhere. Sullen lads in every other doorway smoking their durries and watching us pass through the winding lanes. I am in two minds. Would a dramatic pileup and exit here win me friends or enemies? I would always take my chances outside. Boris had better mind his step.

And then dang me, after the 78th twisting turn there is my two star special with half its neon out and the other half flickering like a bad mossie killer. Boris the Bullet Dodger showed a sense of humour and thanked me for the 3000 in three or four different languages and then was gone in a swirl of dust.  I bet he had spent the whole trip carefully rehearsing what the hell he had to do if his crazy eyed passenger from Australia suddenly went feral on him.  I pass through leather clad minders smoking horse manure cigarettes and ignore them all even though they try and insinuate they have a security role to play in front of this place. I want to tell them that instead of standing around trying to look important they should get some tile cement and work on the front steps. But I am laughing too much at Boris and the ride in and they wouldn’t understand. I think I am going to enjoy this visit.  Heck, I am already.