(4)When in Kathmandu..Stick with the Popcorn 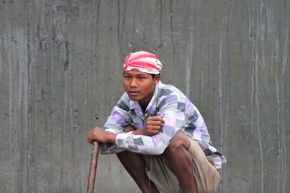 The popcorn seller was a mildly spoken man and seemed overwhelmed by the crowd of people standing around trying to work out what his collection of spices and condiments were all about. But he and his fellows are popular in the street and it only takes a few minutes to work out what he charges and how he puts his little recipes together. His mechanic filthy hands sweep up a handful of fresh white popcorn flowers into a newspaper cup and he hands it to me with a slight flourish and a declaration that I were now up for 20 rupees. Cheap at half the price and no where near as problematic as the weed offered to some of the lads earlier in the afternoon.

We met him, and his other vendor colleagues, as we poked up the tight lanes of Thamel district of Kathmandu. We arrived this morning in what proved to be the first monsoonal downpour of the season. I have never seen rain like it. Sitting only a few seats back from the trailing edge of the 777 wing I was unable to see any wing at all for long stretches of time as we approached the runway. We were ejected from the airport building out into a spattering but warm rain, and into the welcoming and reassurting arms of a chap in the crowd with the appropriate card held up (“Forest Recon”) to indicate he was there to meet us. Our first experience of this being a different cuture was with the touts who insisted to some of the group  that they had hand over their bags to be carried to the bus. It all looks very generous of course but the sting is that they insist on a galloping great tip for 1) the help and 2) to help make them go away. Without realising what is going one of the youngest lads is led away between two buses  – no doubt to be coerced into handing over some cash. We grab him in time and chase him into our bus and the touts off.

Its sounds worse than it is. In fact it s a terrific way for the group, most of which have never been in a country like this, to be introduced to a different way of living and behaving. We are grossly overcrowded in the bus but squeeze in, grind off and swing into the lanes of this very different capital city. This was the first day of rain and the placed looks like it has been washing in muddy water. The gutters and drains are awash with bouncing brown water carrying along a dry season worth of plastic bottles, vegetation and wodden furniture. And anything else for that matter. It’s a trip of wonder for everyone and soon the wise cracks dry up and the crew is largely silent as a third world panorama unfold in front of them. Helped no less by the driver who took us across town via a number of short cuts, including along a monty drain swollen with rain and stinking of sewer. But it was a trip through a maze of people getting about in the mud and the rain. People looking very well to do. But mostly people looking very ordinary and some of them examples of extreme poverty. But people they are and the murmur of comments that eventually resurface touch on the lives they have seen. Jolly good.

I was prompted, during the 777 short finals, by a comment to the effect “I have never seen anything like this” as the observer gazed across the outskirts of the city. Prompted to remember  – that my travels have been into these sorts of places so often that I take this culture and circumstances for granted. So after landing at the hotel we had a chat about what to expect in a third world environment, then hit the road for a walk. And what a walk it proved to be. The lanes and alley ways of this place are tight, and packed with every kind of store, though mostly aimed at supplying the trekker with his or her needs. We wandered along in no particular hurry, fending off the inevitable and unremitting invitation to ‘come into my store’. Said one, ‘this is nothing like Hong Kong’. After a little while we soon found the down jackets and other such gear everyone is looking for and at prices that are insane. The vendors are delighted to have buyers for, as one grumbled to me, this is the off season.

At various points I encourage the team to sit on the side of the street (steps of a closed store are ideal props) and to simply let the lane wash over them. It’s is gold for the photographers but so too for the conversations and interaction we have with everyone. We stop for something spicy in a club of sorts, reclining on cushions and trying very hard not to fall asleep. We departed there in the dark. Now the lanes look very, very similar and we have our work cut out getting oriented. Just as we were doing so the power to the city vanished and we were left dependent on spots of LED light down the darkened lanes. No problem – the inertial navigations system in the head was working OK and we circled back onto our starting point and recovered back to the hotel in the dark without mishap and with a sense of adventure accomplished.

I am always impressed with these fellow travellers. But I am doubly so today for watching their reaction to the very different culture they have been plonked in to. And impressed with their willingness to get in and explore. Few I have worked with have been as game as this lot to poke down dark lanes just because they are there! That is the sort of traveller I am, so to discover others who are as naturally curious and full of wonder at anything new is, well a real pleasure and so completely satisfying.