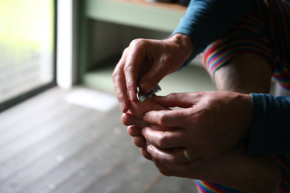 This day is a mixed up one indeed. After our struggle through the night our timings are now messed up. The state of the track is so bad we have no confidence in our ability to get over to Masons Bay in the time we have allowed. We have walked in to the hut at Freshwater at the very time I was hoping to head out to Masons Bay. And the rest of the team are only just recovering from their ordeal so, even though I feel pretty fresh by having that midnight kip under the Rimu, I don’t want to push an agenda which no one will enjoy. So its generally decided that we will stay here for the day.

In truth something other than fatigue was slowing me up by the time I arrived at Freshwater. All that water slopping around in brand new leather boots was mostly okay but that situation was of course quite ironic – I had discovered my old faithful boots has sprung a leak in Peru. Not wanting to get feet wet on Stewart Island I purchased a new pair. It was to no avail yesterday, with a track that was perpetually a bog and for all purposes and by any description was no track at all. So I should have stuck with the old pair, which would have been wet but not stiff. For those new boots quickly wore the flesh off the side of a big toe and by the time the boot came off at the end of the overnight slog and was opened up to dry and air I was disinclined to have it soak any more than I had to.  So it’s a day of sleep, recuperation, story telling, clothes drying, wood cutting and more sleep.

When the first of our group came in last night at 0115 they landed in a hut already occupied by a couple of German girls, an English chap and a New Zealander. Our arrival at that hour must have been a surprise. Then Kathryn and Anna arrived a little bit later – about fifteen minutes  – so our group must have been a very strange thing, especially when the last three of us arrived at 0600 as if it was the most normal thing in the world. We had heard about the German girls from the cleaning crew at North Arm – two trekkers out there with nothing but bread and cheese. Word moves up and down these tracks so quickly.

The day orbited its own world that was a mix of vivid dream, sleepy chat, and some time outside. After a hot drink and hanging the wettest of gear I climb into bed, disrupting one of the other trekkers unwittingly. He was kind enough to make some space. With Barry’s fire well under way the top bunk was very warm so I fell asleep outside my sleeping bag. Dreams chase me for what seems forever but I awake to general chatter only three hours later, so I carefully lower myself down and go out to the dining area and joining in. Everyone is up but no one is excited about going anywhere. It’s a chance to operate on the toe, opening up as many layers of skin as I can and letting whatever has accumulated in there get out. Alison encourages me to draw it with very hot water and that does help. It is clearly infected and I kick myself for not packing some antibiotics as I usually do – there are elements of this trip planning that have been a bot looser on my part than I would like. But the lancing/cutting and the hot water take the hobble out of it and for that I am grateful.  Kavitha helps by cooking up some porridge and with a warm feed in me I am a new man. So much so that I go outside and cut some timber, finding dead manuka still standing. It is easily the driest timber around here that we are ever going to find. After knocking a bit of that stuff down and dragging it with Dylan and Jana to the woodshed I go back to bed. When I surface a few hours later the rain has started again, bringing with it a family of five along with a young couple who have taken the time off to travel New Zealand. They had a fanciful idea that they could quickly circumnavigate the island and then be off in a day or two. They have uncovered the same thing as we – the non existent tracks on this side of the island make for slow progress. And their own discovery is that the island is far bigger than a casual glance at the map suggests.  The couple prove pleasant company but the three daughters of the family bury themselves in their books and refuse to socialise. Each to their own I guess.

We finish the evening agreeing with the other groups what our various start times will be for the next day. We are very happy to let them get underway before us. That means the dining/kitchen area will not be cramped. And the last out get the gear left behind too don’t they?!