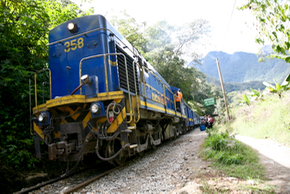 The rain pattered on our tent through the night in that lullaby that nylon and water so often put together. I thought it might herald another wet day but I was awake at 0600 to a clear morning, a droplet decorated tent, the sound of roosters crowing and an agitated dog barking so much he had clearly forgotten what was up his fur. Many of our crew had joined the crowd around the fire last night so were slower off the mark than Henry desired but despite that we got through our breakfast mostly on time. The cheap and abundant tequila had been tempered by the hostel hosts switching everything off at 11pm (much to the relief off those attempting to sleep and, I am sure, the neighbours as well). Despite that restriction on the intake there are clearly some slightly sore heads this morning, and I watch some of them ease out of their tents slowly and carefully, as if deliberate actions somehow make the pain go away. Despite the tequila the clear morning seems to galvanise even the most reluctant starters and one by one they emerge from their nylon caves – though Hamish was early, has his tent packed and is ready to go before most had even woken. Maybe he is the reason the dog is barking! Breakfast included a hot papaya and banana smoothie and a papaya fruit salad, both of which we all seemed to avoid, probably because of what we were about to do. Besides, we used to load the kids with papaya when they were constipated. Worked a treat, so I was not going to over-indulge on that fruit when I was about to be flying through the air. But hot smoothies? I think that was a joke on the part of the cook. Had to be. After breakfast we farewelled Mateo, our diminutive cook. And said goodbye to his two assistants. But not before we ate a huge cake which they had cooked for the occasion. One of the assistants is Mateo’s wife. We surely appreciated their efforts to feed us each day but also to help set up and take down the tents. I watched Mateo’s wife pitch a tent then take a towel and wipe down the inside very thoroughly on our last day. I felt bad – she had been doing this all along for us and I was unaware of her effort.  Mateo gave an earnest speech in Quechua which Henry translated for us, a speech of friendship and family. We all then shook hands and farewelled each other and so ended the trek portion of our adventure. We have walking still to do but it probably does not fit into any definition of mine of ‘trek’.

We piled into a bus and were driven ten minutes up a neighbouring canyon to a zip line company site called Vertikal. Horizontal would be more appropriate but Vertikal it is. After a briefing on safety, and after being fitted up with a harness we were driven to the canyon edge 100m above the river and 300m from the other side. There is no question there was a knot of apprehension in the gut as I clipped on and more so as I moved to the edge. But once under way the sensation of speed and flight was extraordinary. One of the lines was rigged so we were inverted as we crossed the canyon. With the terrain translated for sky, as I streaked across the canyon at 70km/h another line with a traveller in ‘condor’ mode flashed past in the opposite direction on a 900m line. At a closing speed of 140km/h the sensation of speed was impressive.

Five lines of varying lengths and then we were done with the zip line, but all abuzz nonetheless. It was a worthwhile side trip which we all enjoyed. We departed Vertikal at 1015 and were on the road to the ‘Hydroelectrica’. It is hard to recognise this country under a brilliant sky and hot sun after the grey and cold and rain of the last couple of days but I enjoy the view and the colour. We quickly leave the banana and coffee roves and wind our way along the river into the face of steep, green, slab sided ridges with serrated ridge lines. Given the destination I thought we might have seen a dam of sorts but all we saw were holes in the mountain side out of which fell vast volumes of water intent on rejoining the river. The hydro works are all buried deep in the mountains. Forty minutes later we were at the rail head, debussing, stripping layers of clothing off and adding layers of sun screen. A very distinct serrated ridge looms above us but we are less fixated on that than we are on making sure we have all our kit sorted. It’s hot.

We start our walk at the railway head, passing small stalls and shops that carry just the sort of stuff trekkers think they need. Snacks. Drinks. Sweets. And things trekkers know they have forgotten. Tissues. Sun screen. We step away from the shops, up the hill to another siding hidden in the jungle and walk in the sun through dappled green along tracks that don’t look like they are used. In fact for a while I was not convinced the mossed covered tracks carried any trains at all but after a while I realised that it was indeed a working railway. Trekkers move along the railway as if it is any old track and I am amused that there seems no concern for any approaching trains. For the next three hours we walk though flowers, dense bush, and alongside a slightly stagnant Rio Urubamba that flows down from Agua Calientes ahead of us. The rail follows a horseshoe shape and it is inside this horseshoe that the archaeological site of Machu Picchu sits. The river forms a very natural barrier but so too do the massive slabs of granite that spear out of the earth like so many fingers, as Kavitha aptly described them. Machu Picchu sits astride one of those fingers and we get to see the profile of the site high above us as we walk around the horseshoe, and as the forest permits. We stopped for lunch about half way around, taking advantage of a small tin roofed shack at which an old, cheery woman sat with cold drinks and not so cold snacks. I pay a king’s ransom for some Gatorade. Just prior to arriving at that spot we were mildly entertained by a train coming through, loaded with well heeled tourists that were taking the up and back trip. Just for the heck of it I suppose. The engine could be heard a long time before it was seen, the horn echoing around the mountains as it negotiated its way through walls of trekkers like us.

It’s a very warm day and the humidity down among the footings of these granite giants is a pleasant change to what we endured a couple of days ago. The scale of what we walk through is almost incomprehensible. The vertical walls of rock are unlike any mountain formations I have ever seen. Some are so sheer only moss and bromeliads grow on them like so much reluctant carpet. No grasses, tussocks or trees, except in the occasional crack that allows them some purchase. Perhaps most interesting and marked is the complete lack of foothills. These massive monoliths stab abruptly out of the ground and humans are forced to settle for the small concessions of flat ground that appear here and there alongside the river.

Which is where we find the tourist trap otherwise known as Agua Calientes, at the far end of the horseshoe course. We trudge into town, cross the railway which runs up the main street and make our way to the Condor Palace hostel. We get our rooms allocated and are introduced to our guide for tomorrow – Henry has had to leave us a day early since one of his family is ill and he has to get back to Cusco.  We have been walking today with day packs, having left our heavy luggage with the tour company back in Santa Teresa. It’s been sent up behind us on the train. We pick it up from the train at 5.30 and then have dinner with Henry. Based on the meal of trout I enjoyed at Cusco I ordered the same but this version of trout was more akin boot leather (that’s not trout!). We farewelled Henry then slowly grind our way to the top of the town where Condor Palace is perched. We head to bed early. We have an 0300 start tomorrow.