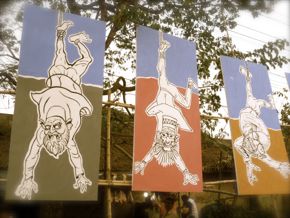 I was thinking of Herbert Money this evening as I picked my way through the smokey warm dark evening of a boisterous Dhaka street. He wrote home in 1927 from Peru recounting his delight at being witness to a revolution in the streets as a President was told he was no longer needed. Actually I think in that case El Presidente was shot. Tonight this place is in an uproar and I know Herbert would love being out here with me.  However by the time I was heading home the police were standing down, taking their grenade launchers, shotguns and assault rifles home. Along with small packets of dinner of course. No point in being out here if you have to go home to cook I guess.

The place is simmering for all sorts of reasons. The 21st of February is the anniversary of student deaths in 1952, protesting the imposition of foreign language on Bengali’s. But you can’t jump at shadows and assume the worst on every corner – one of the most violent sounding agitators of crowds this evening turned out to be a poetry reading commemorating these deaths. Sounded more like a Liverpool football mob getting themselves wound up.

Yesterday an Islamic group stirred the country up and folk died in various protests. So today there are more protests of course, in which I found my little cab caught up at one point, and which this evening I had to step around in case I found myself enmeshed in a shouting mob. A general strike is planned for tomorrow so that will be interesting to see. Riot police are discreetly placed around town and if you keep your eyes open it seems there are small pockets of soldiers at lots of vantage points above the streets. But the street vendors make the most of it all and the fires and coals in small braziers or in carts are stoked to feed the crowds, and some street sections have an Easter Show feel to them as anything and everything plastic and bright is up for sale. It’s not your average Pitt or Collins street evening, that’s for sure. It’s actually damn invigorating I have to say.

The beauty of just wandering and seeing where you end up is that you have the sort of minor adventure I had this evening. For some peculiar reason I found myself in the annual, month long Dhaka book festival. And talking to the former Electoral Commissioner and retired Brig General about Middle East politics. Go figure. And then to another chap who has published short stories, a copy of which I purchased. It proved an enlightening way to learn something more intimate about the country and by the time I had departed I had not only some political volumes under my arm (signed by the general no less) but some Bengali fairy tales as well. The latter are far more interesting.

Just had a note from the hotel staff slipped under the door. They aren’t letting anyone off the premises tomorrow except to take guests to the airport. Could be an interesting day.

Self Diagnosis in Bangladesh
February 13, 2007