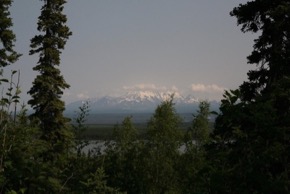 The alarm goes off at 0730 which feels way too early, especially given we chatted with Brad and Ramona until about 0200, including walking out to the bluff and watching people fishing below. Brad explains there are two times in Alaskan summer – the time people are active and the time they are not. Even at two in the morning there is plenty of light even though the sun is not yet up, enough to see men down at the rivers edge casting lines into the water. Apparently the fish like this time of the night as well. No one else is up even at 7.30 so I walk through the spruce to the bluff and look out over the Klutina which surges and races below, swollen by flood water. I scan the area with my binoculars, can’t see any one in camp moving and scan right, spotting some keen fishermen then continue my sweep until a fledgling bald eagle jumps into focus, filling the whole view. He’s sitting on a dead spruce below me watching for scraps the fishermen might leave about. He’s later joined by another more mature bird which comes close enough for me to get some reasonable photos. They are remarkable birds. Not as big as the Wedgetail and without projecting the same power. But they are magnificent nonetheless and let’s face it any raptor is worth paying attention. It’s hard to believe that there used to be a bounty on their heads. 50 cents a head in Alaska. There’s an interesting article here about it nearly being wiped out.  Their chatter is quite distinctive and we tune in to the immature birds calling to each other.

Breakfast is a leisurely affair but everyone is jetlagged and our Friday had been massive and unrelenting. Brad was keen to get us up to Willow Mountain which we finally head towards at midday. The trail we use starts on the property of Terry and Katherine who welcome us then send us off. They are ‘hog farmers’ from Minnesota. The hogs are farmed further up the road from their house which was built over the course of five summers when they flew up to work on it. They draw water from a 300’ well but the water is 37F, just above freezing, so he stores it in plastic drums which sit in the sun, one being painted black to help accelerate the warming process.  Warmed until it reaches 60F when he then turns it on to his vegetable patch. 37 degree water would kill the plants.  Not something I would have thought about! We start up Willow Mountain through Spruce which I think is Black rather than White. Black Spruce tries to survive on permafrost but is a straggly tree as a result. It also tends to lean every which way thanks to that permafrost which can abruptly move, taking the root ball with it. Some Black Spruce can be seen leaning 45 degrees, struggling with their stumpy foliage to somehow survive up here.

The day is warm and sunny, and the scent of spruce very pleasant. So too the other undergrowth though that is less about scent and more about visual pleasure. Purple fireweed, numerous roses, dandelions, daisies and a host of other flowers I don’t know. Avens too perhaps, and buttercups. As we go Brad educates us on the two Spruce types, on Alder and Aspen and the various geologies and habitats which support them. We follow a service track to the top where we soak in a view of the Copper River basin, taking our bearings and orientating Copper Centre to the north against the route to Kenny Lake and Chitina that we will take tomorrow. Mount Drum looms on the far horizon, its dramatic white peak at 16,000’ drawing the eye back to it over and over after roaming across other horizons. Despite the sun and the heat the of the day we are slightly chilled by a stiff breeze. So we are off the top at 3.30pm and carefully picking our way back down  steep sections of the track to Terry and Katherine where we wait for Louise to drop back and pick us up (she and a few others had taken a van back to Brad and Ramona’s rather than climb. I’m glad that some have able to spend time with Ramona who has been preparing us all dinner while we have been walking).

On the way back to Copper Centre we pull in to have a look at the Trans Alaska Pipeline. It’s one of those things one might have read about in Nat Geo or elsewhere. Somewhere in my high schooling we looked at it in detail for some reason. It brings oil all the way across the state to Valdez where it is stored and eventually shipped to refineries in the south. Where it crosses permafrost the pipe comes out of the ground so the hot oil does not melt the ground. Remarkably the stands on which the pipe is supported sport heatsinks to ensure the heat from the oil is dispersed into the air not into the ground. As we stand around and listen to Brad explain some of this engineering we are amused that a bunch of people  from a bus tour gather around and listen to Brad as well. I get the impression that their tour operator was happy to have Brad do the talking. She stood to one side and looked like she was taking a breather. We escaped before we got completely swamped, and drove away from the zig-zagging pipeline though its still very visible from Brad’s place. We drive back there and enjoy fish bake and grilled salmon, clearly an Alaskan specialty. As noted earlier Brad impresses us with a propane torch which he uses to ignite the steel pipe section BBQ over which Alex grills some salmon (the rest Brad has prepared in a more conventional BBQ grill). We sit around and enjoy dinner in the sun before all heading up the road to a native church service. By which I mean a service led by Dino Butler, a Navajo Indian for the locals, many of which are native Indians. The building sits off the road in a complex of other buildings which are very simple in construction and single lining clad which means I suspect they are not used in winter. Indeed they look something like you might find at a construction site, or an ‘old school’ school camps. We listen to blind Donna play the guitar and sing, accompanied by a fellow whose voice worked with hers pretty well. Denis is taken by the songs he has not heard before and makes off with one of their hymn books – with permission of course. We finish the service with multiple servings of pie including a very sweet key lime which of course is de rigueur given we are in the USA.

The wind is up so we spend the briefest of times at the lookout at the Princess Wilderness Lodge looking out over Mt Drum. The top of the mountain has been shrouded all day by a cap of cloud but the wind has cleared it off at last. We encouraged a Chinese tourist with the most enormous camera rig to take a photo or two of our group before we drop the group back to the campground and return to Brad and Ramona’s. There is very little chit chat and we pile into bed and drop off to sleep very quickly. It’s been a clear, invigorating and refreshing day and we have been blessed by our time with Brad and Ramona.